Stressed-out bacteria do measure up : As they grow, E. coli cells constantly mark sites where they can divide once the period of stress is over

When E. coli bacteria are physically distressed, they switch to stress mode and postpone cell division. But they still keep on growing, thus forming long filaments. AMOLF researchers discovered that these bacteria ‘know’ how long they are, which enables them to move protein rings to the sites where they will have to divide once the period of stress is over. The researchers involved published their findings in Current Biology, on 1 March 2018.

“All over the world, a lot of research is focusing on the growth and division of E. coli, but that usually takes place under ideal laboratory conditions,” says Martijn Wehrens, a PhD student in Sander Tans’ group at AMOLF. “The real world is not ideal, of course. It contains all sorts of stress factors. High temperatures, antibiotics or lack of food can cause E. coli to grow differently than it would under ideal conditions.”

Filament
Prior to cell division, E. coli normally doubles in length every hour or so. Before division a ring-shaped protein structure appears on the cell wall. Its role is to ensure that the bacterium divides neatly in two. When stressed, these bacteria continue to grow but do not divide. They become filament-shaped and can grow to more than twenty times their normal length. “Long E. coli bacteria contain multiple copies of their DNA. When the stress situation has passed, the filament divides several times in succession”, says Wehrens. In the course of his experiments, he exposed E. coli cells to stress factors such as antibiotics or high temperatures. “We observed an unusual pattern of cell division that is related to the length of a normal cell. The distance between any two sites at which cell division took place was exactly twice the length of a normal cell. It was as if E. coli itself had used a ruler.”

Staggered ruler
Wehrens also conducted experiments with fluorescently labelled proteins, to better understand the process of cell division in E. coli. When the labelled ring-shaped protein structure responsible for cell division lit up, it appeared to be located at specific site as expected. “To our surprise, however, these division rings do not remain in the place where they are created. When the cells become longer, the rings suddenly disappear only to re-form at a different location”, says Wehrens. “That disappearance in one place and reappearance in another is exactly what is needed to ensure that the distance between two adjacent division rings always corresponds to two normal cell lengths.”
It turns out that this dynamic ruler is regulated by yet another protein system. “This so-called ‘Min system’ plays a supporting role in the division of ordinary E. coli bacteria. It mainly ensures that no excessively small cells are formed”, says the PhD student. “In filamentous E. coli bacteria, however, the Min system appears to do much more. “In elongated bacteria, these protein clusters move in a way that resembles the vibration of a violin string (a standing wave). At certain sites, the concentration of Min proteins varies over time while in other places they do not appear at all. The parts of a vibrating string that do not vibrate are spaced a very precise distance apart. The same applies to those parts of elongated E. coli filaments where there are no Min proteins. These are the very same sites at which the bacterium divides. Thus the Min system works like a ruler that the cell uses to measure itself, as it were, in order to ‘find out’ where to divide.”

The results show that E. coli’s system of ‘ruler proteins’ and division rings enables the bacterium to measure itself and regulate its length very accurately, both in good times and in bad. Wehrens explains that “We now see that this mechanism plays an indispensable part in E. coli’s recovery from stress. As a result, we have a better understanding of how bacteria survive stressful situations, such as when pathogenic bacteria are attacked by the immune system or a course of antibiotics. Rather than being a sign of weakness, the formation of filaments is the result of an effective regulatory system that enables bacteria to elongate in a controlled way. At other times, it enables them to shorten properly.”

Caption 1: (left) Under normal circumstances E. coli bacteria maintain a stable size. When a bacterial cell has lengthened by a fixed amount, it divides into two.
(middle) When stressed (e.g. when exposed to high temperatures or antibiotics), the bacteria continue growing but stop dividing. These elongated cells contain multiple copies of their DNA, as well as division rings that change position as the bacterium grows.
(right) When the period of stress has passed, the filamentous E. coli bacteria start dividing again, producing smaller cells. The location of the division sites is entirely dependent on the total length of the bacterium. 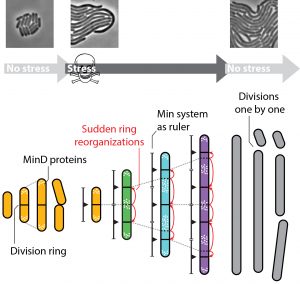 Caption 2: Under normal conditions, the Min system helps E. coli cells to divide at the right place. The cell cannot divide at sites where Min proteins are present. When stressed, the cells form filaments and the Min system becomes the ruler that spaces out the division rings. When the period of stress has passed, the cells start dividing again.