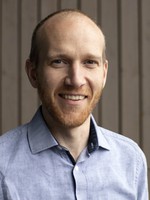 Bruno Ehrler is leading the Hybrid Solar Cells group at AMOLF in Amsterdam since 2014 and is also a honorary professor at the University of Groningen since 2020. His group focuses on perovskite materials science, both on the fundamental level, and for device applications. He is recipient of an ERC Starting Grant and an NWO Vidi grant, advisory board member of the Dutch Chemistry Council, recipient of the WIN Rising Star award, and senior conference editor for nanoGe.

Before moving to Amsterdam, he was a research fellow in the Optoelectronics Group at Cambridge University following post-doctoral work with Professor Sir Richard Friend. During this period, he worked on quantum dots, doped metal oxides and singlet fission photovoltaics. He obtained his PhD from the University of Cambridge under the supervision of Professor Neil Greenham, studying hybrid solar cells from organic semiconductors and inorganic quantum dots. He received his MSci from the University of London (Queen Mary) studying micro-mechanics in the group of Professor David Dunstan.