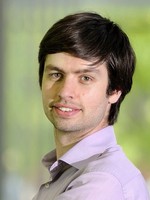 Ewold Verhagen leads the Photonic Forces group in the Center for Nanophotonics at AMOLF, and is part-time professor of Applied Physics at Eindhoven University of Technology. He studies light-matter interactions at the nanoscale, in particular the coupling between photons and phonons in nano-optomechanical systems. In his research, he seeks to understand how the behavior of light and sound in nanoscale devices is governed by fundamental principles such as spatiotemporal symmetries and quantum mechanics. His group explores how suitable system design and control over light-matter interactions can engage the conventional limits to nanophotonic and nanomechanical functionality, in application domains from sensing and metrology to communication.

During his PhD research at the FOM Institute for Atomic and Molecular Physics (AMOLF), he performed experimental and theoretical research in the emerging fields of plasmonics and metamaterials. He studied the behavior and applications of light confined to subwavelength length scales in metallic nanostructures in the form of surface plasmon polaritons. He demonstrated efficient nanofocusing of light on a chip to deeply subwavelength dimensions, showing how surface plasmons were compressed adiabatically in a tapered gold waveguide and guided below the diffraction limit. In a series of experiments, he demonstrated strongly enhanced absorption and emission rates in emitters coupled to plasmonic resonators, of particular interest for enhancing LEDs and solar cells. Finally, he described how light waves in nanoscale waveguides can be made to run ‘backwards’, described by a negative index of refraction. This led to the discovery of a new class of three-dimensional ‘metamaterials’, which can exhibit an isotropic negative index of refraction at optical frequencies.

His postdoc work in the Laboratory of Photonics and Quantum Measurement of Tobias Kippenberg at the EPFL focused on the interaction between light in high-Q microcavities and mechanical motion, in the newly arising field of quantum optomechanics. He developed novel silica microresonators exhibiting strong optomechanical coupling, and used these in a cryogenic experiment to cool a mechanical mode to an average occupancy of 1.7 motional quanta by radiation pressure sideband cooling. He demonstrated that the optomechanical coupling rate can exceed both the optical and the mechanical decoherence rate in the system, thus enabling quantum control of a mechanical oscillator with light (Nature, 2012).

Since the end of 2012, he leads the Photonic Forces group at AMOLF. His group studies photonics in high-quality microcavities and nanophotonic waveguides, with a special interest in the coupling between light and nanomechanical motion through radiation pressure forces in nanophotonic systems. In 2014, he was awarded the NWO Vidi grant on quantum measurement in nano-optomechanical systems, and in 2017, an ERC Starting Grant on topological physics of light and sound.