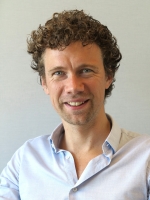 Wim Noorduin leads the Self-Organizing Matter group, which is part of the Designer Matter program. His research focuses on the dynamic interplay between chemical reactions and crystallization phenomena to control the emergence of complexity in the solid state.

He received his PhD at the Radboud University Nijmegen with professor Elias Vlieg, where he developed a simple process for chiral purification by grinding crystals in conjunction with a chemical reaction. He then moved on to demonstrate how reaction diffusion mechanisms can be used to rationally design complex microstructures during his postdoctoral research with professor Joanna Aizenberg at Harvard University.

Noorduin has received numerous awards including the DSM Science & Technology Award, KNCV Backer prize, and the Rubicon, VENI, and VIDI grant from the Netherlands Organization of Scientific Research.