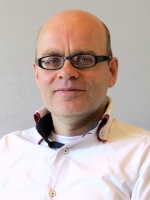 Martin van Hecke is a group leader at the FOM Institute AMOLF in Amsterdam. He got his PhD in theoretical physics in 1996 at the University of Leiden. Since then he has worked on a broad range of topic in soft matter, including pattern formation and chaos, granular media, foams, rheology and jamming, combining experiments, simulations and theory. The common thread in all this works is the fascination for the emergence of complex behavior in seemingly simple systems.

In 2008 he was appointed as professor in the ‘organization of disordered media’ in Leiden, and after been awarded the Vici grant in 2011, he has refocused his research towards mechanical metamaterials, from patterned elastic media to origami. His main current fascination is the inverse problem: to design and make simple materials for which desired complex behavior emerges. Since Sept 2014 he works part-time at Amolf, running a single group at two locations and spearheading the ‘Designer Matter’ initiative.