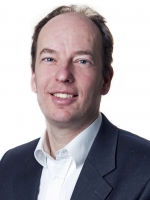 Huib Bakker is one of the pioneers of nonlinear femtosecond vibrational spectroscopy and was the first to use this technique to study the properties of liquid water (Science 278, 658 (1997)). This first study opened up a new field and ever since many groups world-wide have used this technique to study the properties of water and other hydrogen- bonded systems via the time-resolved response of the molecular vibrations. Using femtosecond vibrational spectroscopy, Bakker was the first to show that the relaxation of the OH stretch vibrations of water slows down with increasing temperature, which is now one of the accepted anomalies of water (PRL 81, 1106 (1998)). He also discovered that water molecules show extremely fast resonant (Förster) vibrational energy transfer, which plays an important role in the energy dissipation dynamics of water (Nature 402, 507 (1999)).

More recently, he studied the interactions between water and dissolved ions and molecules and discovered that particular combinations of cations and anions like Mg2+ and SO42- can impede the motions of water over relatively long distances. This effect is highly cooperative, i.e. much larger than the sum of the effects of these ions when combined with other counter-ions (Science 328, 1006 (2010)). However, for most ions he observed the effect on the dynamics of water to be limited to their first hydration shell, meaning that there are no long-range structure breaking or making effects of these ions on the structural dynamics of water (Science 291, 2118 (2001); Science 301, 347 (2003)). Bakker also studied the interaction between water and hydrophobic molecular groups and between water and hydrophylic molecular solutes like urea (PRL 99, 148301 (2007); PNAS 103, 18417 (2006)).

His studies of the solvation dynamics of water have stimulated many groups world-wide to study the same systems with theoretical approaches, in particular with classical and quantum molecular dynamics simulations. Using femtosecond vibrational spectroscopy, Bakker also obtained the first experimental proof for the so-called Grotthuss conduction mechanism of protons in liquid water, and showed that this proton transfer involves the collective motion of »15 surrounding water molecules (PRL 96, 138305 (2006); PRL 102, 198303 (2009)). He also studied the dynamics of water in nanodroplets and found that the nano-confinement leads to a strong slowing down of the energy relaxation and the molecular reorientation ((PRL 94, 178301 (2005); PNAS 103, 15355-15358 (2006)).