The mechanisms connecting growth with cell size have been mysterious – up till now: in a recent publication in Current Biology, researchers from AMOLF and TU Delft  have uncovered that the signaling molecule ppGpp is essential to regulate cell size. Surprisingly, they also discover cells adjust their sizes to concentrations of ppGpp, rather than strictly according to growth rate.

It is a longstanding observation that bacterial cells are larger when they grow rapidly, and smaller when they grow slowly. But how do cells connect size with growth rate? Researchers Ferhat Büke, Sander Tans (both AMOLF and TU Delft), and Greg Bokinsky (TU Delft), artificially changed the concentration of the signaling molecule ppGpp (guanosine tetraphosphate) in live E. coli, and by doing so discovered that cell size is not determined by the growth rate alone, but that ppGpp maintains the link between cell size and growth rate.

The small molecule ppGpp is already known in the bacterial world as a molecule with outsized influence over many cellular machines and processes. To address whether ppGpp also plays a role in cell size, the research team recorded films of individual cells growing in tiny fabricated channels. Dr. Büke discovered that a sudden increase in ppGpp quickly shrinks the cells by transiently accelerating cell divisions, while decreasing ppGpp delays cell division, leading to larger cells. In both cases, the growth rate of the cells decreased, but this decrease was far slower than the cell division response. This shows that ppGpp could be regulating cell size by controlling division timing.

Bokinsky explains: “The molecule ppGpp appears in stressful situations, but is also important for normal cell growth: the faster a bacteria grows, the less of this molecule is present. You would expect that the size of the bacteria responds only to the changing growth rate, but we found something else: cell size responds directly to concentrations of ppGpp. We were able to gently alter the concentration of ppGpp in bacteria and time the change in growth rate, cell size, and division timing accurately. This allowed us to show for the first time that cell size does not respond to the growth rate, but rather that ppGpp controls both cell size and growth rate in parallel; ppGpp somehow sits in the middle and regulates both processes.” 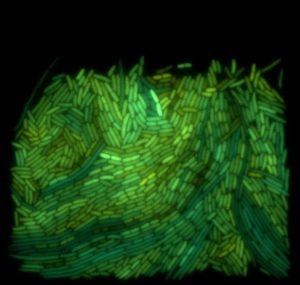 The mystery of how bacteria regulate their size

Bacteria are impressive machines of survival and efficient resource utilization, but how do they do it? In order to thrive under such diverse conditions, bacteria have evolved molecular sensors which allow them to detect both their environment and also their own growth rate. Using these sensors, bacteria can regulate most of their biochemical processes.

One of the bacteria’s most important sensory systems uses a signaling molecule called guanosine-tetraphosphate, ppGpp in short; with the use of this ppGpp, bacteria always grow as fast as the environment allows them. But this is not the whole story: with more metabolism, cells need more space and vice versa. Up till now this has been a conundrum for scientists: how do bacteria regulate their sizes to match their metabolism?