In order to create an organ like the plant root from a single niche of pluripotent cells, plants must control the orientation of the division plane. If all divisions were transverse to the growth direction of the cell the organ would only growth lengthwise. In order to create a requisite number of cell layers the division plane of certain cells has to be longitudinal to the growth direction, in order to start a new parallel cell file.

Together with experimental colleagues from Utrecht University, AMOLF researchers Eva Deinum, Simon Tindemans and Bela Mulder have elucidated the molecular mechanisms behind this orientational switch, by simulating the dynamics of the cortical microtubule network on the box-like cells in question. The dominant orientation of the microtubules determines the direction of the division plane.

Studies on plants with mutant developmental patterns show that microtubule-associated proteins known as CLASPs are recruited to certain cell edges to facilitate the switch to a longitudinal orientation. If the activity of these proteins is incorporated in the simulations the switching indeed occurs in a robust manner. The results of this research are published on the 13th of April in the scientific journal Cell. The results are also interesting for both engineering more efficient crops and cancer research. 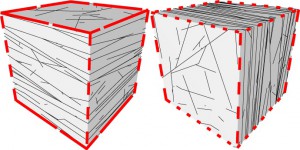