How does a bacterium pack a 1.5 millimeters long circular chromosome into a cylindrical container of just 2 micrometers long and 1 micrometer wide?

This is a question that has occupied microbiologists for decades, but like many questions surrounding chromosomes it is difficult to tackle experimentally because of the small size of the bacterium and the relatively high density of DNA inside it.

In the past researchers in the group of Bela Mulder had already suggested that polymer physics might provide clues to the structure of the bacterial chromosome, but to date hard experimental evidence is lacking. Intriguingly a number of recent reports have indicated that the bacterial chromosome shows evidence of a helical morphology. Bela Mulder and Debasish Chaudhuri have tried to answer whether such a morphology could be the consequence of the polymer properties of the DNA, in combination with the extreme degree of confinement imposed by the bacterial volume. Their findings are published in Physical Review Letters, on June 27, 2012.

The researchers found clear evidence for the stability of helical arrangements, and explain these on the basis of the effective stiffening and thickening of the polymer backbone due to the side loops. To that end they have simulated a highly simplified model of a bacterial chromosome, consisting of a backbone to which side loops are attached, mimicking the cross linking induced by chromatin associated proteins. Whether the results actually bear on the problem of the bacterial chromosome remains to be seen, but they clearly show the ability of ‘sculpting’ the entropy-driven conformations of highly confined polymers. 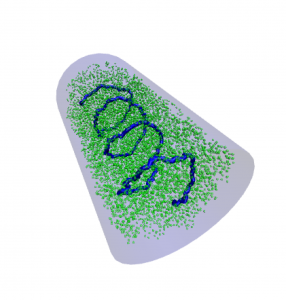 Snapshot of a helical equilibrium configuration of our model bacterial chromosome.