Metallic nanoparticles have the ability to confine light to volumes much smaller than the wavelength. If such particles are arranged in a special configuration they can show interesting optical phenomena, similar to a molecule consisting of multiple atoms. Such coupled particle systems are therefore referred to as metamolecules. Due to their small size, it is difficult to control and study their optical response. To address this problem, researchers from the FOM institute AMOLF and Stanford University have used an electron beam to control the optical behavior of such a metamolecule in a novel way by carefully positioning it with respect to the structure. The research was published in Nanoletters on October 12th, 2015.

The study concerns a metamolecule consisting of one horizontal and two vertical gold nanoparticles, which is known as a dolmen structure (See Figure) due to its similarity in appearance with the ancient dolmen tombstones. This special arrangement of particles can render the structure transparent for certain colors whereas it strongly absorbs and scatters light for others, making it suitable to operate as a nanoscale optical sensing device or ruler.

The response of the structure depends on the intrinsic interaction between the particles which are dictated by the geometry, but also on how they are excited by an external stimulus. This stimulus can be a beam of light, but such a beam cannot be focused on a spot that is small enough, thus limiting the ability to precisely control the optical behavior of the dolmen.

As an alternative the researchers employed a tightly focused electron beam from an electron microscope to locally excite the dolmen. By carefully positioning the beam with respect to the structure, it is possible to selectively excite one or more elements in a controlled manner. Subsequently, they measured the resulting light emission (by using cathodoluminescence (CL) spectroscopy) and the energy loss experienced by the electron (by using electron energy loss spectroscopy (EELS)). By combining these two techniques the researchers were able to study what colors of light are efficiently emitted and which colors are absorbed in the dolmen when the structure is excited by the beam at different positions (see Figure for illustration). Controlling and studying the optical response in this way provides a powerful method which could be employed in fundamental nanophotonics research as well as optimization studies toward novel applications.

The research was carried out by Toon Coenen (AMOLF, now at Delmic BV), David Schoen, Sander Mann, Said Rodriguez, Benjamin Brenny, Albert Polman, and Mark Brongersma and was made possible by funding from the FOM Foundation, NanoNextNL, the Air Force Office of Scientific Research, and the European Research Council.

Figure: Left: Transmission electron microscopy image of the dolmen metamolecule. Right: Schematic illustration of the experiment. A tightly focused electron beam is used to locally excite the dolmen after which the light emission (CL) and the electron energy loss (EELS) are studied. 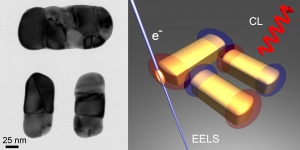