Researchers from AMOLF, Cambridge, Lund and Kiel have revealed that molecular vibrations drive the process known as singlet fission.

Singlet fission potentially allows to double the charge carrier generation in organic materials and therefore may drive the development of highly efficient solar cells. The results are published in Nature Chemistry on October 26, 2015.

In molecular solar cells, excitons are generally used to generate electrical charges, but a single particle of light, known as a photon, will normally only generate a single exciton. A process known as singlet fission can be used to convert a single photon into two energetically excited particles, known as spin-triplet excitons. If the process of singlet fission could be applied in devices and controlled, it may enable solar cells to double the amount of electrical current that can be extracted every time a cell is illuminated.

The researchers verified that this ‘two-for-one’ transformation involves a highly elusive intermediate state in which the two triplet excitons are “entangled”, a non-classical feature of quantum theory that causes the properties of each exciton to be linked, or correlated, to its partner’s. These kinds of quantum “super positions”, are the basis of Schrödinger’s famous thought experiment in which a hapless cat is – according to quantum theory – in a state of being both alive and dead at the same time.

By shining ultrafast laser pulses – just a few quadrillionths of a second – on a sample of pentacene, an organic material which undergoes singlet fission, the researchers were able to directly observe this entangled state for the first time, and showed how excited molecular ( vibrations make it both detectable and drive its creation through quantum dynamics.
The research was supported by the European LaserLab Consortium, Royal Society, and the Netherlands Organization for Scientific Research. 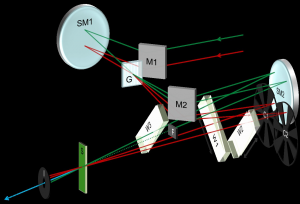 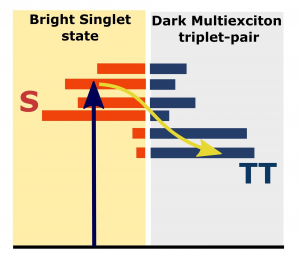