The Dick Stufkens Prize 2017 for the best PhD thesis of the Holland Research School of Molecular Chemistry (HRSMC) is awarded to AMOLF postdoc Sven Askes. In his thesis ‘Upconverting Nanovesicles for the Activation of Ruthenium Anti-Cancer Prodrugs with Red Light’, Askes describes a clever combination of materials and techniques for a new approach in photochemical cancer therapy. The jury was impressed by the quality, the originality and the interdisciplinary character of Sven Askes’s PhD thesis and expects that the work will have considerable impact on future development of photochemical cancer therapy.

The Dick Stufkens Prize is awarded annually to the best thesis defended in the period July 1 to July 1 of the next year by a Ph.D. student belonging to the Holland Research School of Molecular Chemistry (HRSMC). The prize – first awarded in 2008 – consists of a certificate and an amount of 1000 euro. 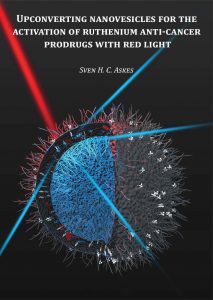 Sven Askes performed the research for his thesis at the University of Leiden in the Institute of Chemistry. Askes is now a postdoc researcher at the Nanoscale Solar Cells group at AMOLF. He uses plasmonic nanostructures for the light-driven assembly of photocatalytic devices with sub-wavelength precision. Such devices can eventually be used to produce solar fuels like molecular hydrogen.