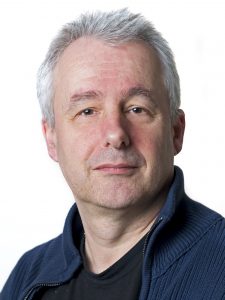 As of 1 January, Bela Mulder (Theory of Biomolecular Matter) has been appointed Professor by Special Appointment in Theoretical Biophysics at Utrecht University.

With this appointment,the Faculty of Science aims to build bridges between the departments of Biology and Physics and to increase the interaction with AMOLF. The chair has been established by the Stichting ter Bevordering der Atoom‐ en Molecuulfysica. Mulder has long‐standing fruitful collaborations with biologists and physicists in Utrecht. For example, he collaborates with Prof. Anna Akhmanova (Institute for Biodynamics and Biocomplexity) on the development of an artificial cell. In the field of liquid crystals and soft matter, he has collaborations with several Utrecht physicists, including Prof. René van Roij (Institute for Theoretical Physics) and Prof. Marjolein Dijkstra (Debye Institute for Nanomaterials Science).