The Netherlands Organisation for Scientific Research (NWO) has awarded a Vici grant to AMOLF group leader Femius Koenderink. A total of 216 researchers submitted a pre-prososal. Out of 132 elaborated proposals, 36 researchers now receive a Vici grant of up to 1.500.000 euro.

Control over the interaction between a single emitter and a single photon is crucial for microscopy, solid state lighting, and optical information processing. Currently, researchers pursue two diametrically opposite routes to reach such control. They either build the best possible microcavity around the emitter that stores light for a very long time , or conversely they build the best possible nano-antenna to help the emitter send and receive photons as fast as possible. The new research program “hybrid nanophotonic architectures for ultrafast quantum optics” combines the best of both approaches: developing hybrids that contain both the light emitting antennas and the light receiving microcavities. This approach leads to a  very strong interaction between light and matter that takes place over unprecedented THz bandwidths, and with unprecedented, ultrafast response times.

At AMOLF Koenderink heads the Resonant Nanophotonics group. He is also a professor by special appointment at the Institute of Physics at the University of Amsterdam (UvA).

About the Vici grants
The Innovational Research Incentives Scheme has been set up in 2000 by NWO, KNAW and the universities jointly. The aim is to promote innovation in the academic research field. The scheme is directed at providing encouragement for individual researchers and gives talented, creative researchers the opportunity to conduct their own research programme independently and promote talented researchers to enter and remain committed to the scientific profession. It includes three forms of grant: Veni (for researchers who have recently completed their doctorates), Vidi (for experienced researchers) and Vici (for researchers of professorial quality). 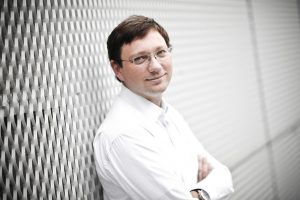