The solar energy research network SOLARDAM has received its first research grant. The 1 M€ grant from the Amsterdam Academic Alliance (AAA) enables collaborative research between AMOLF, UvA, VU, and ECN on the development of novel methods to convert sunlight to electricity and fuel.

The goal of SOLARDAM, founded in 2013, is to carry out a multidisciplinary research program to harvest energy from the sun by generating electricity and fuel through combinations of photovoltaics, photocatalysis and photosynthesis. The SOLARDAM initiative builds on successful energy research programs of the contributing partners. By bringing together expertise and sharing facilities the collaborating partners are able to address problems that could previously not be solved by any of the individual parties.

At the core of the AAA-funded research program are eight focused kick-off projects that each involve at least two network partners. AMOLF participates in several of the projects. Each project starts with the acquisition of a postdoctoral scientist, associated to two principal researchers from different groups at UvA, VU, AMOLF and ECN. Together the eight kick-off projects form a nucleus from which the SOLARDAM consortium grows. SOLARDAM is the largest concentration of solar energy researchers in the Netherlands; the network consists of more than 100 scientists. With this funding for SOLARDAM the collaborating institutes have the unique opportunity to establish a coherent solar energy research program based on the concentrated expertise in the Amsterdam area.

New Photovoltaic Materials (LMPV) at AMOLF is part of SOLARDAM. 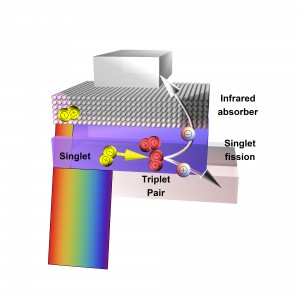