AMOLF researcher Wim Noorduin and fellow scientists Nadir Kaplan, Joanna Aizenberg and L. Mahadevan of Harvard University have developed a model that can be used to accurately describe and predict the formation of a broad range of exquisite three-dimensional crystal structures. This provides the basis for a new, cheap and versatile production method for the manufacture of functional materials, such as light guides for solar cells. The research team presents its results on March 31st in Science.

The publication is the sequel to Noorduin’s Science publication in 2013, when his beautiful microscopic “crystal flowers” adorned the journal’s cover. At that time, he was working as a postdoctoral researcher at Harvard University. In 2015, Noorduin returned to the Netherlands to set up a group at AMOLF in the area of Self-Organizing Matter (as part of the Designer Matter research theme). He investigates how chemical reactions and crystallisation processes can lead to new, microstructured functional materials. The Science publication is an important milestone in the research. ‘Four years ago, we were mainly enthusiastic about the versatility of the crystallisation technique,’ says Noorduin. ‘Now we also know how we can give practical relevance to it.’

Functional shapes
In the current Science publication, Noorduin and his Harvard colleagues present a crystal growth model that describes with mathematical precision how parameters such as salt concentrations and acidity determine the shape of the crystals. The model therefore indicates how completely new, functional shapes can be produced. What is so unique about the precipitation system is that the shape of the micro-objects does not depend on the crystal structure of the embedded crystals. When salt or sugar is allowed to crystallise, it produces faceted crystals: the exterior reflects the arrangement of the atoms or molecules on the inside. Noorduin’s method is not limited by this. ‘We got rid of the limitations of the crystal structure, so to speak, to provide ourselves with greater design freedom. The intrinsic crystal properties, however, remain unchanged, for example the ability to guide light.’

One of the applications that Noorduin has in mind are photonic materials: materials that exhibit an unusual interaction with light. For example, he is currently producing spiral-shaped, light-guiding structures with a fluorescent light source in the base, as well as a wide range of vase-shaped structures. ‘If you add a reflective coating to these vases, then they could function as a light concentrator for solar cells, for example.’ Up until now, researchers have tried to produce such “microvases” using high-tech material processing techniques such as lithography and micromachining. These “top-down” manufacturing techniques are expensive and subject to limitations. Noorduin expects his “bottom-up” approach to be cheaper and more versatile. 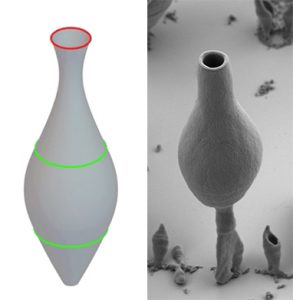 On the left, a simulated structure created using the model presented in Science, and on the right, a vase-shaped structure that was actually realised (electron microscope image). The height of the structure is 50 micrometres, which roughly equals the thickness of a human hair. The green bands in the simulation indicate at which points the acidity needs to be adjusted. The model links the ‘growth rate’ of the structure to the local concentration of catalysing silicate molecules and that concentration is in turn influenced by the local curvature of the vase structure. Using their model, the researchers can produce not just vases, but a whole range of complex shapes.

Notoriously complex
The Science publication is the result of dogged persistence. Noorduin and Kaplan worked on the research for more than four years and had to overcome many frustrations in the process. Whenever they thought they had completed the model, some measurement or other proved not quite to fit. ‘The liberating insight came when I had already packed all of my stuff to return from Harvard to the Netherlands,’ says Noorduin. A year of almost daily Skype sessions with Kaplan and a new series of experiments in the AMOLF laboratory eventually resulted in the model that held true on all fronts and which appears to explain all observations.

The reaction system is somewhat similar to a popular school experiment in which pupils blow air through a clear solution of calcium hydroxide. Due to the CO2 in the exhaled air, a white milky precipitation of calcium carbonate is immediately formed. Noorduin carefully “blows” CO2 through an alkaline solution of barium chloride, as a result of which crystals of barium carbonate are formed. However, his solution also contains sodium metasilicate. This results in an unusually complex co-crystallisation behaviour in which silicates are also formed.

It quickly became apparent that the locally changing acidity around the crystallising microstructures influences the supply and removal of reactants, which eventually determines the shape of the crystals. Accurately modelling that process proved to be so difficult due to the unexpected effects of the silicates present. ‘Silicate chemistry is notoriously complex,’ says Noorduin. ‘We eventually realised that certain silicate molecules influence the local acidity. They act as a buffer, as a result of which the acidity changes less strongly than one might expect. Once we realised that, everything fell into place.’ 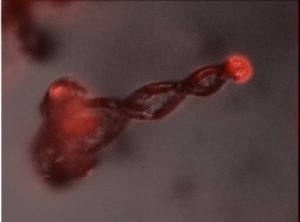 Image (produced with optical microscopy) of a spiral-shaped structure with a length of 50 micrometres, which is about the thickness of a human hair. At the base of the spiral (left), a fluorescent dye has been incorporated, which emits light that is subsequently led to the tip of the spiral.