Van Lare wrote the most recent paper, published in ACS Nano, together with colleagues from the Helmholtz Centre in Berlin. They show how SiO2 nanoparticles, made using soft nanoimprinting, can be used to enhance light trapping in ultrathin CuInGaSe solar cells. Nanoparticles positioned on the molybdenum back contact are able to not only reduce unwanted light absorption in the Mo, but also increase the cell voltage, by reducing interface recombination at the Mo/CuInGaSe interface. As a result cell efficiency is raised from 11.1% to 12.3%.

In a paper in Nano Letters Van Lare presents a new light trapping geometry for thin-film solar cells composed of dielectric light scattering nanocavities at the interface of the metal back contact and the semiconductor absorber layer. The geometry is based on resonant Mie scattering and avoids the Ohmic losses found in plasmonic nanopatterns that are widely studied. The insights can be applied to improve the efficiency of ultrathin amorphous Si solar cells. The paper also reveals the role of resonant light scattering from both the AZO nanostructures and the embedded Si nanostructures. The results are generic and can be applied to nearly all thin-film solar cells.

In a third paper, in ACS Photonics, Van Lare presents an approach to optimize the spatial frequency spectrum of nanopatterns that are used for scattering light into the solar cell. A Monte Carlo algorithm is used to optimize the scattering power spectral density of an array of Mie scatterers on top of ultrathin amorphous Si solar cells in such a way that it overlaps with the discrete spectrum of waveguide modes in the cell. The optimized geometry outperforms other options, such as optimized periodic patterns, purely random arrays and commercially used Asahi-U-type geometries. 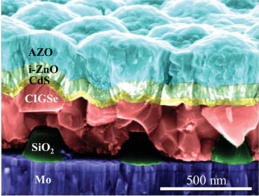