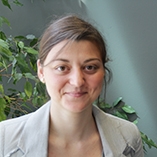 Alarcon received her PhD from the University of Barcelona (2009). In 2010 she started as a postdoctoral Marie Curie fellow at the Ecole polytechnique fédérale de Lausanne (EPFL), which included two years at the Lawrence Berkeley National Laboratory. In 2014 she got an Ambizione Energy fellowship to lead a group focusing on next generation solar energy conversion into fuel.

With her AMOLF research group 3D Photovoltaics Alarcon will study solar cells with high efficiency. The group aims at exploiting the extended degrees of freedom offered in semiconductor nanostructures to fabricate new unconventional solar cell designs at low cost. Not only is she interested in high conversion efficiencies, but also in widening the range of functionalities, such as the integration of PV with small consumer electronics or large building components. For this, the group aims at extending the boundaries of 3D additive nano-manufacturing for the bottom-up fabrication of functional semiconductor nanostructures. Alarcon expects that the flexibility and low-cost of the fabrication method will open up a new range of possibilities for the generation of novel devices, in particular in t

he domain of photonics and energy conversion.