Huib Bakker has been appointed as director of FOM Institute AMOLF starting on February 1st, 2016. He succeeds AMOLF director Vinod Subramaniam, who became Rector of VU University on September 1st, 2015. At this date Bakker took over from Subramaniam leading AMOLF as interim director.

Bakker knows AMOLF well, having done his doctoral research at AMOLF and working as head of the Molecular Biophysics Department since 2003. Bakker is a physicist with a broad and multidisciplinary view on science, having a long track record of collaborations with companies. He is a professor by special appointment at the University of Amsterdam (UvA) and he is a member of the Netherlands Royal Academy of Sciences. 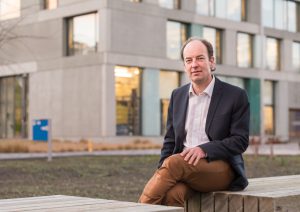 Huib Bakker is a world leading expert in research on the characteristics of water interacting with ions, (bio)molecules and surfaces. These interactions play a crucial role in many biological and chemical systems, for example in the folding of proteins and the transfer of ions along and through membranes. Bakker developed special non-linear spectroscopic technique that enables researchers to determine the molecular mobility and structure of water in complex systems. The insights acquired with these techniques find applications in the food industry, energy storage and water purification.

FOM Director Christa Hooijer responds enthusiastically: “Huib Bakker was an excellent interim director and I am happy that he is willing to continue as director of AMOLF. He is a leading scientist with a keen eye to cooperation between research groups, but also between research groups and the support and technical staff at AMOLF. While NWO goes through the transition towards a new organization, he works closely with other NWO and FOM institutes. With Huib Bakker as a director, AMOLF is in good hands.”

Career
Bakker did his Masters in Physical Chemistry at the Vrije Universiteit in Amsterdam and carried out his PhD research (cum laude) in the group of Ad Lagendijk (UvA/AMOLF). During his PhD research he studied the energy transfer in and between small organic molecules. He then moved to Germany where he worked for three years as a postdoc in the Institute of Semiconductor Electronics, after which he returned to AMOLF in 1995 as a scientific group leader. He then started his research on the mobility and intermolecular interactions of water molecules for which he developed the technique of ultrafast femtosecond mid-infrared spectroscopy. In 2001 he was appointed as Professor by special appointment at the UvA in the field of condensed phase spectroscopy. In 2005 he received the Gold Medal of the Royal Netherlands Chemical Society KNCV, and in the same year he became guest professor at the Ecole Normale Superieure in Paris. In 2015 he was one of sixteen new members of the Netherlands Royal Academy of Sciences.

During his scientific career Bakker published more than 200 articles and acquired many research grants. In addition he established many contacts with various companies. He was closely involved in setting up the Advanced Research Center for Nanolithography (ARCNL) and, more recently, in establishing a large cooperative research program between AMOLF, WUR and Unilever.