AMOLF researchers have found a new method for producing layered materials. Inspired by nature, they developed a physical-chemical process that yields highly regular microstructures. They describe this in a paper that was published this week in the journal PNAS. It offers the prospect of a relatively simple way to manufacture advanced, functional materials. Furthermore, the research can help us to better understand the genesis of natural patterns.

“In nature, regular patterns are found in all kinds of places,” says Christiaan van Campenhout, first author of the PNAS article. “Examples are the stripes of zebras, the bands on a shell, or the wings of butterflies. These patterns often have interesting mechanical or optical properties.” According to Van Campenhout, materials scientists view these with a certain amount of jealousy because it is often very difficult to produce materials with special properties in the lab or a factory. Such advanced functional materials are characterized by highly detailed, well-defined micro- and nanostructures. They are important for new sensors, efficient batteries, and more high-tech applications.

“When you see that the regular structures in nature seem to develop almost spontaneously, then that inspires you to try and achieve the same in the lab,” remarks Van Campenhout, who is doing his PhD in the group of chemist Wim Noorduin in collaboration with physicist and group leader Martin van Hecke. The starting point of the research project was an experimental process discovered at the end of the 19th century. This concerns a so-called reaction-diffusion process, which causes spontaneous spatial patterns to arise as a consequence of the delicate dynamics between a reaction and the supply of the required reactants. “Such processes initially seem to be simple, but their progression can be complex,” observes Van Campenhout. “Although a lot of research had already been done, nobody had yet managed to create very regular patterns. Yet, that is what most applications require.” 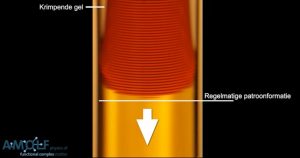 In the PNAS publication, Van Campenhout describes how he and his colleagues managed to produce well-defined regular structures. Van Campenhout also produced a short film about this. In a test tube, he brings together two solutions that jointly precipitate a salt. One solution is already in the tube in the form of an aqueous gel. The second solution is added on top of this, after which the dissolved substance moves downwards. “Subsequently, you see a layer of salt precipitating from top to bottom at regular intervals,” says Van Campenhout. “This results in a series of layers in the test tube, which are all at exactly the same distance from each other.” What makes his approach new, he explains, is that the gel shrinks slightly throughout the process. “Consequently, a sort of supply channel arises along the test tube wall, as a result of which the second solution can freely flow from top to bottom. The outcome is a neat buildup of layers at exactly the same distance from each other.”

The shrinking of the gel can be controlled in many different ways, for instance, with specific reactants or via the pH. In addition, the shrinkage is more or less independent of the precipitation reaction. “This provides us with many possibilities to further develop the method and to precisely determine the desired properties, such as the thickness of the salt layers and the distance between these.” Meanwhile, Van Campenhout has already demonstrated that this can yield functional materials: he produced a diffraction grating from a thin slice of layered gel. “If you illuminate this with a laser, then you obtain a nice interference pattern. That is only possible if the layers – which function as the grating’s lattices – are positioned at well-defined distances from each other.”

Relatively simple system
The researchers hope that the new process will ultimately acquire a place in the ‘toolkit’ for the production of advanced materials. Project leader Noorduin: “In the world of materials, we have become accustomed to the fact that it is very difficult to create certain structures. The smaller the details, the harder it is: to manufacture electronic chips, it is now almost possible to position individual atoms on a computer chip. However, that requires incredibly complex and expensive equipment. We have now demonstrated that a certain ordering and complexity can also be achieved in a relatively simple system, with the help of spontaneously occurring processes.” Van Hecke adds: “We are still in the process of discovering more conditions and rules, but this is a new approach that will certainly be meaningful for the development of new advanced functional materials.” Noorduin finds it fascinating that in the ‘natural’ processes, no supreme molecular or atomic control is needed to be able to create a complex material. “Once we fully understand the process and know its most important prerequisites, then it will almost occur spontaneously.”