Physicists catch light in the eye of the storm

Stillness rules the eye of a hurricane; without a hurricane no eye, and without an eye no hurricane. In a similar manner, physicists of research institute AMOLF, the University of Amsterdam and the University of Texas at Austin, have captured light in the eye of an optical vortex. “The light could move in any direction but does not do so,” says researcher Hugo Doeleman. The research will be published on June 4th in the top journal Nature Photonics.

“It is a strange phenomenon. It’s like locking up light in a prison with invisible walls,” says Hugo Doeleman of the AMOLF group Resonant Nanophotonics and the University of Amsterdam. Doeleman says many people in his discipline are fascinated by the phenomenon that was discovered in 2013. This phenomenon that the renowned physicists Von Neumann and Wigner envisioned for electrons in 1929 was also found to occur in light. In research jargon, this phenomenon is called a BIC, a bound state in the continuum. A BIC occurs when light waves are captured and remain somewhere without anything opposing their movement. “The light could escape but it does not do so,” says Doeleman.

In 2014, a group of researchers from MIT, Harvard, and Yale predicted that these BICs are the center of a kind of optical vortex. Doeleman and his colleagues Wouter den Hollander and Femius Koenderink have now experimentally proven the existence of that vortex. They managed to produce a BIC and to demonstrate that the light is indeed captured in a polarization vortex: the light is caught in the eye of the storm. The researchers from Amsterdam worked closely together with two researchers from the United States, Francesco Monticone (Cornell University) and Andrea Alù (University of Texas) to understand how the vortex catches the light.

To produce a BIC, a sample is needed with two optical channels that scatter incoming laser light. The sample produced at AMOLF consisted of a row of miniature silicon nitride rods on a thin glass membrane. Due to the interference caused by the structure of the sample, a vortex shape arises in the polarization direction of the light. This occurs around the point where the light is captured – the eye. The team developed a model that shows what happened in their sample. “The model reveals that this invisible wall, which the light cannot pass, arises exactly when the light waves scattered by the two channels destructively interfere. This is precisely the condition that defines the eye of the storm”

The most striking aspect is that the vortex makes the BIC robust, says Doeleman. “As long as there is a vortex, there is an eye. Small imperfections can displace or deform the vortex, but the eye moves with it. Comparable to when a hurricane moves, the eye moves with it. Only if the vortex completely disappears does the BIC disappear as well.” That will be useful for applications in photonics, as it means that the BIC is tolerant for aberrations that always occur.

In the longer term, BICs could be useful to manufacture small lasers. Doeleman: “To make a good laser, you must be able to capture light for some time and concentrate it.” Such a small laser can then be placed on a photonic chip. “However, that is something for the longer term. For now, we are mainly fascinated by the actual phenomenon. We are at the start of discovering what BICs can do.” 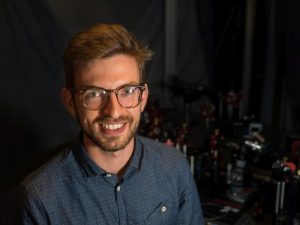