Observing the misfolding of a single protein

Researchers from FOM institute AMOLF have directly observed the misfolding of a protein chain. Protein chains are thought to fold into the wrong structure sometimes, and thus cause neurodegenerative diseases. It has now become possible to follow this crucial process directly, by mechanically manipulating single proteins. The paper reporting on this work is published online on 14 August in Angewandte Chemie.

The intricate functions that proteins perform in cells relies on a precise folding of the chain of amino-acids it is composed of. Proteins with folding errors are not only non-active, but are thought to be toxic to cells, and to underlie a range of diseases as well as ageing. However, the process of misfolding remains poorly understood, as it is difficult to study directly. In particular, it is a challenge to distinguish between the misfolding of one chain and aggregation between two chains, as both results in proteins that are not active.

Zooming in on individual proteins
Researchers from the group of Sander Tans at the FOM Institute AMOLF have studied misfolding in luciferase, which is the protein that gives fireflies their ability to produce light. In a conventional experiment, many luciferase proteins would first be unfolded by a chemical denaturant. Delays in the detection of luminescence can be a sign of misfolding, but also of aggregation. This problem of observing multiple effects was addressed by interrogating a single luciferase protein with the optical tweezers technique, such that aggregation was impossible by definition. The proteins were genetically modified so that they could be attached to micron-sized beads, whose position can be accurately measured using a focused laser beam. Individual luciferase proteins could thus be mechanically stretched, and then relaxed again to study refolding. This method had been used on smaller proteins that do not display misfolding, but not on complex proteins such as Luciferase that are prone to misfolding and aggregation.

Following misfolding transitions
The experiments showed that unfolded luciferase chains refolded partially when relaxed. At a certain point most of these partial folds continued to refold to the compact fully folded state. However, one partial fold appeared blocked from further refolding, and also required a larger applied force than the others to unfold. In this experiment, the transitions to and from this misfolded state could be followed directly. Consistent with the idea that an erroneous structure had formed, this misfolded state was only produced during refolding, and not during unfolding.

Implications of the findings
The results and approach are relevant to several longstanding questions. As mentioned, misfolding is thought to be a causal trigger of aggregation and neurodegenerative diseases. The ability to detect misfolding will now allow study of the factors that influence it. For instance, one can test whether factors that decrease the amount of aggregation, such as metal ions and chaperones, truly affect aggregation or the causal misfolding. 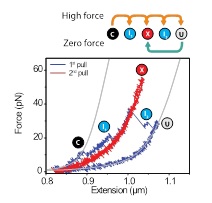 When unfolded by stretching its ends, a single molecule of Luciferase unfolds in a multi-step process, visiting multiple conformational intermediates (blue, from C to U). When relaxed, the chain can refold to a misfolded state (red, X), which has a long lifetime and high mechanical stability, and prevents formation of the fully folded state.