AMOLF group leader Huib Bakker has been elected as a member of the Royal Netherlands Academy of Arts and Sciences (KNAW). Today, the Academy announced the election of 16 new members from various disciplines. The election was based upon nominations from peers. On Monday, September 28th 2015 the new Academy members will be officially installed in the Amsterdam Trippenhuis building of the KNAW.

At AMOLF Bakker is department head of the Molecular Biophysics department and group leader of the Ultrafast Spectroscopy group. He is an expert in using ultrafast spectroscopy to elucidate the dynamics and structure of water and ice in their various forms. A unique infrared spectroscopy technique developed by Bakker enables researchers to determine the motion and interaction of water molecules. This knowledge about the behaviour of water molecules is of fundamental importance and in applications for the food industry, energy storage and water purification.

Bakker is also a professor by special appointment at the University of Amsterdam (UvA). 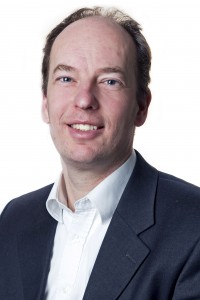