Researchers of FOM Institute AMOLF and Laboratoire Interdisciplinaire de Physique in Grenoble (France) have shown that the evolution of bacteria can be accelerated when their environment fluctuates in time. The research gives new insights in the evolutionary limitations of organisms and the positive effect of changing conditions, and leads to new suggestions for the evolutionary optimization of biotechnological processes. The work also reveals a flip-side, because evolutionary acceleration can also be detrimental in some cases. For example, the alternating use of antibiotics could increase the risk that bacteria more rapidly evolve resistance against antibiotics. The results will be published Friday, November 13, in PNAS.

According to Darwin’s dogma, organisms evolve by gradual improvements; mutation-after-mutation. If no single mutations are available anymore that yield improvements, evolution stalls. It is indeed well known that evolution can stall, for example in the slow transition from fins to legs. The research in the group of Sander Tans now shows that stalled evolution can be accelerated in variable environments.

Stalled evolution
The researchers studied mutations of the protein in the bacteria E-coli that regulates the sugar metabolism. Following evolution in the lab can be rather difficult since only few mutations occur in billions of growing bacteria. ‘The essential step in this research was to construct all possible mutations in the protein in the lab’, explains researcher Marjon de Vos. ‘It was quite an effort to construct them, but in this way we could ‘trap’ and study evolution after every mutation that was created. We could accurately measure the function of the protein in two environments. These environments either did or did not contain a sugar derivate which is detected by the protein’.

In both constant environments, with or without sugar, the evolution appeared to stall already after a few mutations. This can be viewed as a path that ends at the top of a mountain. The path goes up if the bacteria’s ability to detect the sugar increases, but goes down if mutations reduce the detection ability of the sugar. Higher peaks were available in the landscape, but they were inaccessible because natural selection only selects for improvements. Evolution thus stalled on these suboptimal peaks.

Changes in the environment
The researchers found however that evolution accelerated when the presence of the sugar changed over time. It appeared that in the different environments, the peaks turned into valleys and valleys into peaks. By this surprising inversion, the bacteria which had gotten stuck on a peak were now placed in a valley, from which they could again climb another peak. Thus while evolution got stalled in the different constant environments, fluctuations between these environments enabled further progress, which accelerated evolution. 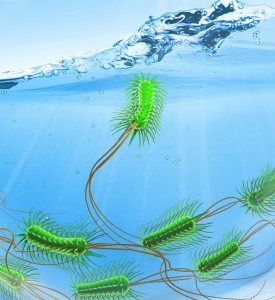