Arrival of Martin van Hecke initiates a new line of research. FOM Institute AMOLF is launching a new line of research in designer matter, aimed at the design of new forms of functional matter. Professor Martin van Hecke (Leiden University) will lead a new research group at AMOLF, with effect from 1 September 2014, in the area of mechanical metamaterials. Together with Van Hecke, AMOLF will further expand the broad line of research into designer matter over the next few years. Van Hecke will continue to spend half of his time at Leiden University.

Vinod Subramaniam (director of AMOLF) is delighted with the arrival of Van Hecke: “We are delighted that Van Hecke will help set up this new line of research at AMOLF. He has a superb track record, is a thought leader in this new discipline, and is capable of connecting the different perspectives and parties involved. This new theme offers AMOLF an outstanding opportunity to optimally bridge AMOLF research in biophysics and nanophotonics.”

Examples of designer matter are metamaterials that have mechanical or optical properties that do not occur in nature and active bio-inspired materials, which can mimic and sometimes outperform the functions of biological systems (muscles, sensors). This is a highly promising discipline because it creates entirely new forms of matter, which will lead to applications that have not yet been conceived.

“We are on the eve of a major revolution. We are capable of designing and manufacturing an unprecedented diversity of new forms of matter. This is called ‘matter by design’, and physicists will play a key role in this. Whereas physicists in the past concentrated on questions about the structure of matter, now they are increasingly focussing on questions about how complex systems behave. In addition there is an unprecedented growth in possibilities for manufacturing new forms of matter – from 3D printing to nanomanufacturing. These developments are now coming together and provide an immense opportunity to produce completely new, complex and functional materials,” says Van Hecke.

The initiation and expansion of new lines of research that are of strategic importance for Dutch science and industry is a key task of AMOLF. At present, AMOLF has significant research activities in optical metamaterials and biological matter. Van Hecke’s work on mechanical metamaterials will strengthen this. Over the next few years AMOLF hopes to consolidate strengths in the field of designer matter through a combination of expanding existing activities, attracting new group leaders, and establishing connections with external partners.

Van Hecke will continue to work part-time at the Leiden Institute of Physics (Dutch acronym LION). Eric Eliel (director LION) is particularly pleased that AMOLF embraces the subject of designer matter in this manner; ”I am proud that Van Hecke has been asked to help give shape to this activity within AMOLF and I am pleased that LION and AMOLF have reached an agreement about a shared appointment for Van Hecke. I am looking forward to the new possibilities for collaboration that will arise for researchers in Leiden and at AMOLF.” 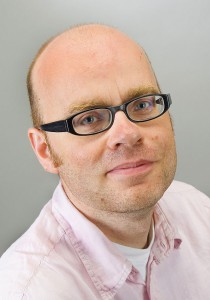 Mechanical metamaterial made of pink rubber. The blue clamps determine the mechanical behavior of the material. Without these clamps the material becomes simply elastic, but by carefully positioning the clamps the hole pattern will flip over when the material is compressed vertically. The metamaterial will respond counterintuitively; it expands under compression and shrinks when pulled on.