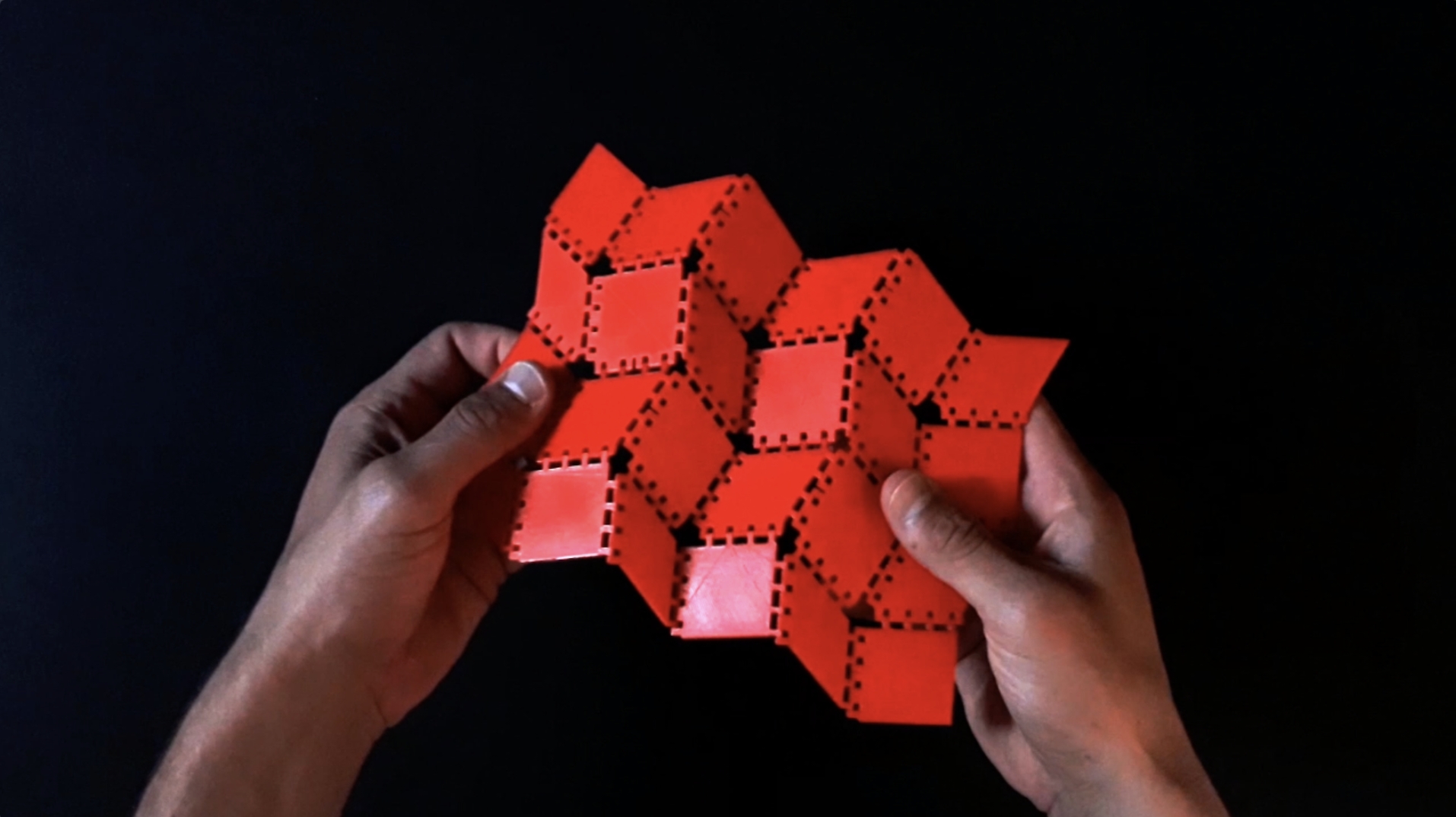 How can a single origami crease pattern be folded into two precisely defined target shapes? Researchers at AMOLF and Leiden University have created an ‘alphabet’ of 140 origami ‘puzzle-pieces’ that allows them to do just that, as described today in Nature Physics. This discovery could help in the construction of origami robots and towards designing smart programmable materials.

Physics is not just quantum mechanics and black holes. Even the folding of paper, e.g. origami, poses many riddles, and with this research one of those has been solved.

Peter Dieleman, Nick Vasmel, Scott Waitukaitis and Martin van Hecke from Leiden University, Department of Physics and research institute AMOLF discovered a method to design foldable rigid origami. Useful in many technological applications, rigid origami deals with flat surfaces divided into rigid panels that fold along straight creases. ‘It is very difficult to design a rigid pattern that will fold,’ says Martin van Hecke, ‘most patterns are overconstrained and must remain flat.’

Until now, only a select few foldable rigid origami patterns were known, including Miura-ori, a fishbone pattern from the Japanese artistic tradition. Looking for more patterns, the researchers decided to focus on patterns where four folds meet at every intersection in a so-called vertex.

Starting out from a small subset of four vertices, the researchers found a way to combine those into tiles, with a vertex at every corner. Systematically checking all combinations, they found 140 basic tiles that are guaranteed to fold. These are the letters of the origami alphabet.

In order to make larger foldable patterns, the research team only had to find tiles that fit together; this turns rigid origami design into a jigsaw puzzle. The complex math of the underlying origami is ingeniously encoded into the shape and color of the pieces. While playing with their puzzle pieces, the researchers quickly rediscovered the classic crease patterns such as the Miura-ori. More importantly, they also found a wealth of never-before-discovered crease patterns.

Origami tiles represent crease motifs, and can be put together like a jigsaw puzzle to create larger patterns. A completed puzzle is a code for a crease pattern that can be folded into multiple target shapes.

Surprisingly, the researchers found that all such crease patterns could be folded in at least two different ways. Moreover, the target shapes can be exactly programmed by choosing the tiles in the right combinations. To demonstrate this, the researchers designed a single crease pattern that can fold into two target shapes: the Greek symbols alpha and omega. Using a laser cutter, they etched their pattern into a sheet of Mylar, which, after folding, exactly matched their predictions.

According to van Hecke, such programmable fold patterns could be used in future origami-based robots, as foldable solar panels for satellites, or in smart materials with programmable properties. The underlying principles could also give insight into naturally occurring folding systems, such as membranes and proteins.