This research aimes at finding nanophotonic structures that increase emissivity and directivity of nanoscale solar cells, to exceed the Shockley-Queisser limit. We investigate this physical principle both from a theoretical perspective, as well as engineer nanophotonic structures that realize increased emissivity, to diminish non-radiative recombination, and exhibit directivity in absorption and emission of light in our nanoscale solar cells.
A fundamental limit to the maximum efficiency that can be reached with a single-junction solar cell is set by the Shockley-Queisser limit. This limit takes into account the mismatch between the spectrum of the sun light and the bandgap of the solar-cell material, and extraction losses. The contributions of these losses are shown in the figure for silicon. Extraction losses are caused by energy loss through black-body radiation of the cell, which gives rise to a dark current. This sets a limit on the open circuit voltage, VOC, of the cell:

where G is the generation rate, due to the radiation of the sun, and R0 the recombination rate, due to black body (emissive) radiation. The VOC can thus be increased by decreasing the amount of black body radiation R0. The generation rate is limited by the solid angle subtended by the sun, while the black body radiation of our nanoscale solar cell occurs in all directions. By limiting the emission and absorption in all directions except towards the sun, R0 is decreased while G remains the same (Xu et al., Scientific Reports, 2015). Directivity is then the property of having high emission and absorption in one specific direction, which constitutes the nanoscale equivalent to concentration in macroscopic photovoltaic systems (Mann et al., ACS Nano, 2016).

In the theoretical part we want to get a fundamental understanding of what levels of directivity can be achieved with these nanophotonic structures. Is there a theoretical limit on directivity, given certain geometrical shapes and material characteristics? Can they ever beat conventional concentrating lenses? Can we have high directivity around the band gap and high absorption at higher energies at the same time? How do these nanostructures interact when placed in an array to cover a full (macroscopic) solar cell?

In the experimental part we try to find, fabricate, and measure structures that realize high directivity. The right shape for the structures are found through simulations using an evolutionary algorithm that optimizes towards a highly directive shape, done by our former group member, dr. Erik Johlin. These shapes can be fabricated using electron-beam-induced deposition using a scanning electron microscope, which works like a 3D-deposition ‘printer’ on the nanoscale. We investigate the possible shapes and resolutions that can be achieved with this technique, and determine the optical properties of the nano-lens material created. The goal is to place the directivity-optimized structures on top of highly luminescent fully inorganic perovskite nanoparticles and measure the resulting angular emission pattern with Fourier microscopy. 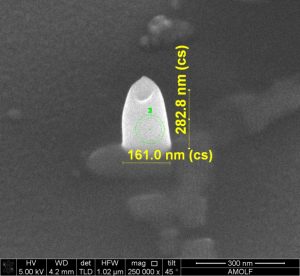