All eukaryotic cells contain a critical structure called the cytoskeleton, which is a collection of filamentous networks
that consist of microtubules, actin filaments, and intermediate filaments.
In this thesis, we use tools provided by statistical mechanics
to characterise the movement and function of cytoskeletal filaments.
In chapter 1, we summarise and derive the concepts from statistical mechanics that
we use in this thesis. Specifically, we discuss equilibrium mechanics, the Fokker-Planck
equation, and how to predict the rates of rare events that are caused by the crossing of
a free-energy barrier. Then, we apply these techniques to the movement of two cross-
linked cytoskeletal filaments in chapter 2. It has been observed that the friction between
microtubules that are connected by diffusible cross-linkers increases exponentially with
the number of cross-linkers, and we investigate the mechanism behind this exponential
increase. We find that the relative movement of the filaments occurs via discrete steps
that are caused by free-energy barriers, leading to experimentally testable predictions
on how the friction coefficient between the filament scales with the density of cross-
linkers. In chapter 3, we show that Kramers theory, which calculates the rates at which
the filaments jump over the free-energy barriers, breaks down in the model presented in
chapter 2. We review each assumption of Kramers theory and discuss why this break-
down occurs. Then, in chapter 4 we examine how entropic and condensation forces de-
pend on the number and density of cross-linkers, and how the interplay between these
forces and the exponentially increasing friction coefficient shapes the movement of the
filaments. The predicted trajectories of the filaments can be compared to experimen-
tal data to test our prediction that the friction scales exponentially with the number of
cross-linkers. In this chapter we also study the effect of cooperative interactions be-
tween the passive cross-linkers and of multiple protofilaments taking part in the bind-
ing of these cross-linkers. In chapter 5 we show how actin filaments can be transported
by growing microtubules and passive cross-linkers that connect the actin filaments with
the tips of the growing microtubules. The actin filament tracks the moving microtubule
tip via a condensation force, which tends to maximize the overlap between the actin fil-
ament and the chemically distinct tip region of the microtubule, but this transport is
opposed by friction forces caused by the cross-linkers. From this model, we predict how
the average transport time of these actin filaments depends on the growth velocity of the
microtubule and the length of the actin filament, and we test the predicted trends exper-
imentally. Finally, inspired by the Pom1 and Cdc42 systems, we investigate in chapter 6 if
a protein distribution on the membrane can be polarised by the transport of the proteins
along filaments that point towards a spot on the membrane. Using a minimal model, we
find that polarisation requires detailed balance to be broken either by motor proteins
that carry the proteins to the membrane or by a chemical modification of the proteins
driving a flux from the filament to the membrane. We compare these two mechanisms
by quantifying the amount of free energy that is dissipated by each, showing that the
processes are not equally efficient in creating a dense protein spot on the membrane. 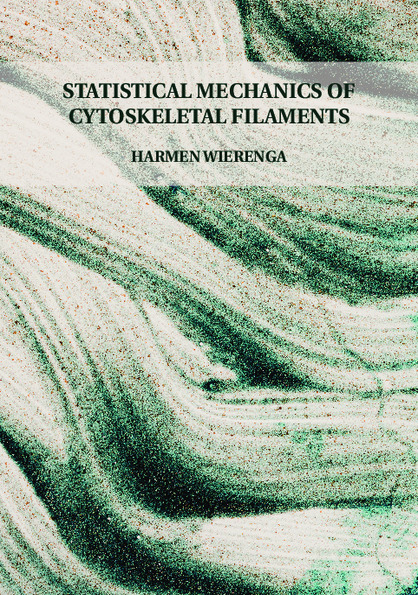