Vortices in hall of mirrors show spinning light the way out 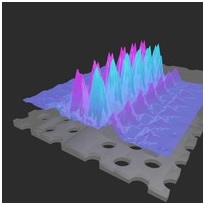 Researchers from FOM institute AMOLF have used the classical toolbox of physics to make predictions about the quantum world. Using a classical experiment, they showed how the direction in which a quantum light source emits light reveals the quantum state (spin) of that source. On 2 April the AMOLF researchers published the results in Nature Communications.

Hall of mirrors
The aforementioned hall of mirrors that the researchers used for their experiment is in fact a photonic crystal that consists of an ultra-thin wafer of silicon that is just 220 nanometres thick (a nanometre is one millionth of a millimetre). In the silicon a pattern of holes has been etched, which ensures that just like in a real hall of mirrors, light is reflected in all directions and cannot simply escape. The properties of the photonic crystal determine where the vortex locations are and in which direction light at these locations normally rotates.