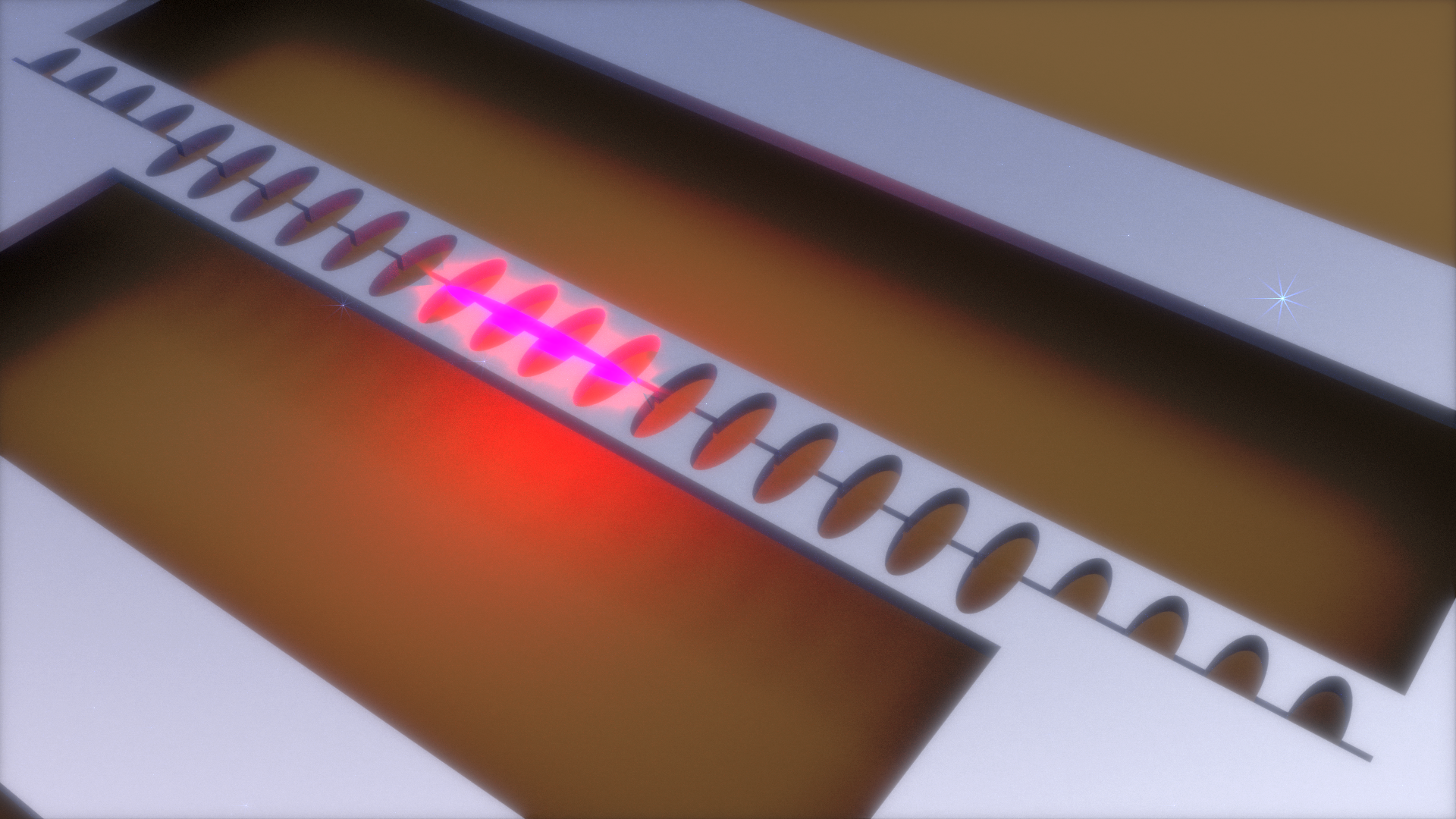 Vibrations on a chip feel a magnetic field

Using light to couple the strings of a nanoscopic guitar

Magnetic fields are indispensable in controlling charged particles, for example in electric motors and particle accelerators, and famously introduce many unique phenomena in materials. They influence the trajectory of charges: an electron propagating along a path in a magnetic field will not traverse the same path if sent in the opposite direction. Through this, magnetic fields unlock an exotic control of electrons at the nanoscale. “For many applications it would be useful to control vibrations or sound waves in a similar manner, breaking their usual propagation symmetry,” says Ewold Verhagen, who leads the Photonic Forces group at AMOLF. “However, this is challenging, because mechanical vibrations do not carry charge, which makes them invisible to magnetic forces. “

Light coupling the strings on a nano-guitar
Verhagen and his group members John Mathew and Javier del Pino circumvented this problem with two nanometer scale silicon strings that each vibrate at a different frequency. Such strings would normally be unable to take over each other’s vibrations, but their interaction with laser light does the trick. Verhagen: “At these very small length scales, photons interact with the nanostring through a force called radiation pressure, which is proportional to the light intensity. Vibrations in the string can slightly change this light intensity. With two strings illuminated by a laser, vibrations in the first string influence the radiation pressure exerted on the second string. If the frequency is right, this causes the second string to vibrate as well.”

“This means that a vibration of the first string can be transferred to the second string, even though they have very different tones. And it does so with a small time delay (phase)”, says Verhagen. “In the same way, if we ‘pluck’ the second string, its vibrations can also be transferred to the first string. In that case, however, the time delay is negative. Thus, the vibration transport is different in opposite directions.”

This means that the symmetry normally found in propagating mechanical vibrations (i.e. sound) has been broken, which is the same as what happens to an electron in a strong magnetic field. Verhagen: “In fact we are simulating a magnetic field for the chargeless particles – phonons – that make up a sound wave. We are the first ones to have done this in a nanoscale set-up.” 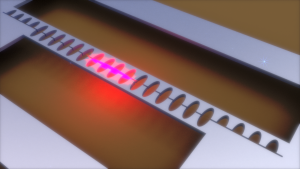 Artist impression of two nanostrings coupled through light. Because the strings are unequal in length, they cannot transfer their vibrations from one to another (because they vibrate at different frequencies). Modulated laser light captured between the strings does the trick in a non-symmetrical way. The delay in the transferred vibrations is different in opposite directions.

Echo-free sound
A ‘magnetic field’ for sound would eventually offer endless possibilities for nanoscale resonators. “We imagine creating all sorts of exotic acoustic waves in nanoscale circuits orchestrated by light”, Verhagen says excitedly. “Like a one-way route for sound with vibrations that cannot echo back. Or even a sound equivalent for topological insulators, with a bulk material that is impenetrable for sound and vibrations that are only transferred at the edges. Nanomechanical resonators are used more and more as sensors and to process signals in mobile phones. New ways to control them thus have exciting prospects for improved functionality of such devices. But most importantly, our results are relevant for a fundamental understanding of sound waves. The discovery of how electrons behave in a magnetic field has led to several Nobel Prize winning discoveries, like the Quantum Hall effect, and underlies special properties of graphene and Majorana particles. Who knows what fascinating behavior of sound a magnetic field might help to reveal in the near future!”