Researchers at FOM Institute AMOLF have discovered a novel method to create directional beams of light on the nanoscale based on a simple single-element nanoantenna design. The insights from this work could be used in the future to design very small light directors for nanoscale sensing applications in biology and photonics. The research will be published today in the journal Nature Communications.

Directing light with nanoantennas is very challenging due to the small length scales involved. Most antenna designs are based on metallic nanoparticles which have the ability to strongly scatter and confine visible light. A common approach to achieve strong directionality is to use complex antenna designs consisting of multiple small antenna elements, like radio-antenna designs but scaled down a million times in overall dimensions. These structures are hard to fabricate and very sensitive to small imperfections in size and spacing of the elements.

Strong directionality
The researchers used a cathodoluminescence microscope to study the directionality of simple individual gold nanocylinders on a silicon substrate with diameters ranging from 50 to 180 nanometers. This special microscope, developed at AMOLF, is needed to resolve the optical properties of these very small nanoparticles. The researchers excited the nanocylinders with a nanometer-scale electron beam and found that a strongly directional beam of red light can be made, by precisely positioning the electron beam at the edge of the particle. The directionality is strongest for the largest particles. From simulations and analytical theory the AMOLF team found that this enhanced directionality is due to the fact that these larger particles do not radiate only as a dipole-like small nanoparticle but also have higher order quadrupole terms that strongly contribute to the beaming. The interference of these different types of radiation leads to strong beaming of the light emission.

The “Lighthouse”effect
Interestingly, the researchers discovered that the direction in which the light beam is emitted can be controlled by changing the electron beam position along the edge. The light beam always points away from the excitation position and co-rotates if the electron beam moves along the edge of the particle, essentially acting as a lighthouse on the nanoscale. This way of steering light at the nanoscale using only a single antenna element could be used in the future for novel types of biosensors, to control the directionality of light-
emitting diodes and lasers, and to improve the efficiency of solar cells.

The research was funded by FOM, the ERC, and NanoNextNL 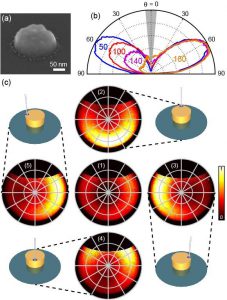 Figure (a) Electron micrograph of a cylindrical gold nanoparticle with a diameter of 180 nm (b) Angular radiation pattern for nanoparticles with diameters of 50 (blue), 100 (red), 140 (magenta), and 180 nm (orange) for light with a wavelength of 600 nm (red light). (c) Angular radiation patterns for excitation in the center (1), top (2), right (3), bottom (4), and left (5) clearly showing “lighthouse-like” beaming of light from a single particle.