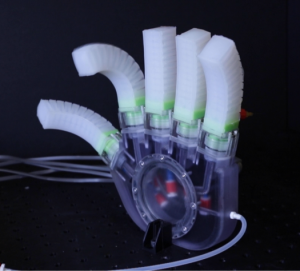 A smartly designed pressure valve allows soft robots to respond to their environment without the need for computer control, reveal AMOLF researchers in their article in the journal Matter. That brings robots with natural movements and tactile responses similar to those of living organisms one step closer to reality. Such developments render soft robots more suitable for exploring rough and unknown terrain or for medical applications.

We still often think of robots as rigid machines controlled by a central computer that precalculates each step. Conversely, living organisms move smoothly because intelligent behavior is ingrained in their bodies. That would be ideal for robots that have to continually interact with people, such as those used in medical care. Researchers in the field of soft robotics are therefore developing robots made from soft, flexible materials that can respond to changes in their environment without external guidance.

Bas Overvelde, head of the Soft Robotic Matter Group at AMOLF: ‘We want to make robots without a central computer that can move and respond to their environment due to reflexes built into the robot’s body.’ In the journal Matter, Overvelde’s team presents such a soft robot that works on air pressure without the need for electronics. It can walk and change rhythm by responding to its environment thanks to a smartly designed valve. 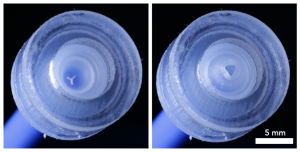 At the heart of the new soft robot is a ‘hysteretic valve’, which is how the researchers refer to their invention in their publication. Outsiders may recognize the valve as a variant of a ketchup bottle opening. ‘The valve ensures that you can easily dose the ketchup and that the liquid does not leak from the bottle,’ says Overvelde: ‘But, if you turn the bottle upside down and squeeze it really hard, the ketchup sometimes sputters and makes a mess.’ This happens when the opening repeatedly and quickly opens and closes. Modern bottles have been adapted so that they sputter as little as possible, but Overvelde and his colleagues set out to discover whether this normally undesirable behavior could allow a robot to move.

The researchers started with a computer model to design characteristics such as the stiffness of the minuscule flaps in the valve opening. After that, the valves were produced by pouring silicon rubber into a precise 3D-printed mold. With a laser, they then cut small notches in the valves. As a result of this, they produced valves that are normally closed and suddenly open when the pressure becomes high enough. The valves only close again once the pressure has decreased considerably. If you connect this kind of valve to a pump and reservoir, you automatically create a rhythm of building up pressure and releasing air. With this, the muscles of the soft robot are alternately inflated and relaxed.

The new component seems simple but was discovered to have hidden powers, says AMOLF PhD student Luuk van Laake. ‘When we built a computer model of two such valves that were connected to the same reservoir, they started to open alternately with high precision. That was entirely unexpected, but it subsequently proved to work in practice, as well.’ Based on this principle, the researchers were able to build a four-legged robot with a natural gait that did not need any external commands. And they also managed a soft robotic hand demonstrator with five rhythmically tapping fingers. 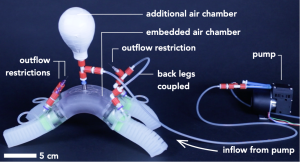 Responding to the environment
The ultimate dream of soft robot designers is a robot that not just moves, but also responds to its environment. Van Laake: ‘Ultimately, you want a robot that automatically changes its gait if it encounters an obstacle just because the muscles and joints respond to the change in pressure.’

In the lab, the robot’s responsiveness to the environment proved quite successful already. When the researchers briefly closed a flexible tube by squeezing it a bit, the pressure in the robot body changed and the robot then switched to a different gait. ‘Our soft robots respond to the environment without a central computer needing to control that,’ explains Van Laake.

Efficient
We still have a long way to go before we have soft robots at the bedside. But the researchers are optimistic about the prospects. Overvelde: ‘With our robot, you can see how simple components can be used to produce complex behavior without the need for a computer that calculates each movement.’

According to Van Laake, a soft robot that moves due to natural reflexes will not only save computer power, but energy as well. ‘In living organisms, a lot of movement and behavior emerges from the shape of the body and the mechanics of muscles, instead of the brain directing all movements.’ For example, our heart automatically balances the pressure in the left and right ventricle and we reuse the elastic energy stored in our tendons during each step we take. ‘That is incredibly efficient. There is still an awful lot of behavior to be explored in this field.’