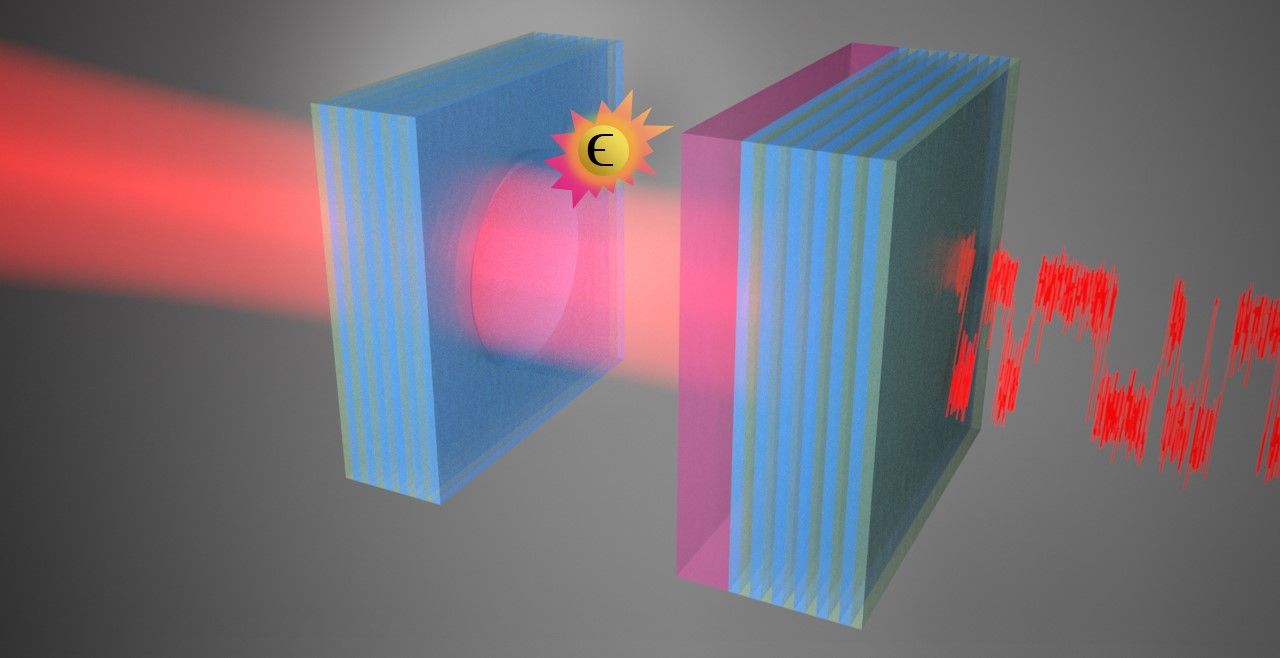 Noise in a sensor? No problem!

In conventional sensing methods, noise is always a problem, especially in systems that are meant to detect changes in their environment that are hardly bigger or even smaller than the noise in the system. Encountering this problem in his experiments with interacting photons, AMOLF physicist Said Rodriguez thought of a way around it. In an article that will be published in Physical Review Applied on February 13, 2020, he demonstrates how noise can be turned into a resource for optical sensing rather than a problem.

“Using noise to improve sensing methods is counterintuitive”, Said Rodriguez admits. “Imagine trying to see the largest letters in a vision test and failing. Then, imagine how a sudden earthquake helps you to see even the smallest letters in the test. Shaking air molecules between the screen and your eyes help you to read the tiny letters. This is similar to what happens in the optical sensor that I propose.”

Tiny changes in the environment
Like many researchers in the field of optics, Rodriguez works with resonant systems that can detect tiny changes in their environment. A typical optical sensor is based on a cavity, an empty space with laser light resonating between two mirrors. The resonance frequency depends on what happens in and around the cavity. “For example, a gas flowing through the cavity changes the resonance frequency, but so does a change in temperature or pressure”, Rodriguez explains. “A typical detector measures this change in the resonance frequency as a change in intensity of light that comes out of the cavity. However, intensity fluctuations, i.e. noise, always disturb the measurement. The most common way to reduce the deleterious effect of noise is to average the signal over a long period of time. This limits the detection speed, while in the vast majority of applications there is great value in sensing as fast as possible.  Moreover, the detection speed is always limited by noise; even if all classical (e.g. thermal) noise is suppressed, quantum noise remains.”

Embracing noise for faster sensing
While most optical sensors are linear – the light that comes out is a linear function of what went in – Rodriguez proposes an optical sensing scheme based on nonlinearity, which means that photons can effectively interact with each other inside the sensor. “Inside the optical cavity, we add a material that influences the resonating light in a non-linear way. The light that comes out is not a linear function of what went in, but it is bistable: for a given input, the output has two possible values”, he says. “Due to inherent noise in the system, the output of the sensor flips randomly between those two values. When the resonance frequency of the cavity changes (e.g. because a particle enters the cavity) this flipping pattern changes as well.”
Analyzing the statistics of the flipping pattern reveals the change in the resonance frequency. Since noise increases the flipping rate between the two values, and a greater flipping rate means less time is needed to acquire sufficient statistics, this means that noise makes the sensor faster. Rodriguez: “In conventional sensors increased noise increases the time needed to detect something entering the cavity, but in this sensor the detection is faster when there is more noise. That is really remarkable!”

Optimal sensitivity for quantum noise
Because, ultimately, quantum noise can never be fully avoided, realizing sensors that embrace rather than avoid noise is useful. Rodriguez found that the sensitivity of this noise-embracing sensor depends on noise as well. “Just like the detection speed, the sensitivity increases with noise, but not continuously. It turns out that this sensor can perform optimally in the regime of quantum noise”, he says. “This makes it an interesting alternative in regimes where conventional sensors cannot perform very well.”

Rodriguez calculated the theoretical detection speed limit of the proposed non-linear sensing scheme and compared it with the theoretical detection speed limit of a linear sensor. Because the non-linear scheme performs almost as good as a linear method, he has high expectations. He plans to theoretically investigate the system further and eventually develop a physical sensor that embraces noise. “Similar methods are already in use for electrical systems, but to date noise has never been used as a resource in optical sensing”, he says. “By showing how the inevitable quantum noise can be embraced for sensing, these results may push the limits of what is detectable by state-of-the-art optical sensors.”