New mechanism to convert light into electricity: the ‘plasmo-electric effect’

Researchers of the FOM Institute AMOLF and the California Institute of Technology have discovered a new method to generate electrical potentials using light. Using precisely sculpted metal nanocircuits they found that light can be effectively captured and converted to an electrical potential as high as 100 millivolt. The research was published on 30 October 2014 in the journal Science. The AMOLF-Caltech team, who have been collaborators for many years, give the newly discovered effect the name “plasmo-electric effect”. Albert Polman, the leader of the AMOLF-part of the team: “This is an entirely new way to convert light into electricity. We have now shown that we can create a voltage; the next step is to see if we can also collect current and generate electrical power.”

Nobel metal particles made of copper, silver, and gold, are well known for their colorful spectra when illuminated with light. A well-known example are the stained glass windows in ancient churches in which the colors originate from small metal nanoparticles that are embedded in the glass. Light that is incident on these particles is converted into plasmons, oscillations of free electrons in the metal, which leads to strong absorption and scattering of particular colors of light.

The AMOLF-Caltech team investigated this light absorption process in artificially created metal nanostructures that they made using modern cleanroom techniques. They discovered that a negative electrical potential was formed on gold nanospheres, if they are illuminated with blue light. In contrast, a positive potential was found for illumination with red light. The voltage was measured using an ultra-sensitive needle that was placed above the nanospheres while they were being illuminated with laser light.

Inspired by this initial result, the team fabricated metal nanocircuits composed of a square array of minute 100-nanometer-diameter holes in a 20-nm-thin gold film. Like the nanoparticles, these metal hole arrays possess bright plasmon resonances, of which the wavelength can be controlled by the spacing between the holes. When irradiating these circuits with a laser, and gradually tuning the color of the light from blue to red, a negative potential (-100 mV) was found for blue light and a positive potential (+100 mV) for red light.

The researchers developed a thermodynamic model that describes the measured data well. The model shows that the incident light generates minute temperature variations that thermodynamically drive the exchange of electrical charges on the circuits, leading to the measured potentials. 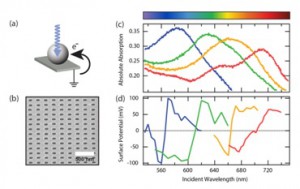 Plasmo-electric effect (a) Schematic of a metal nanoparticle that becomes electrically charged by illumination . (b) Electron microscopy image of the metal nanocircuit, composed of an array of nanoscale holes in a 20-nm-thin gold film. The scale bar is 500 nanometer. (c) Measured optical absorption spectra for metal nanocircuits with different spacings between the holes (175, 225, 250, and 300 nm). (d) Electrical potential of the nanocircuits in (c) as a function of wavelength of the incident light. The measured potentials range from -100 mV to +100 mV as the wavelength of the incident light is tuned from blue to red. 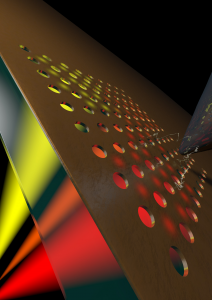 © AMOLF/Tremani Artist impression of the plasmo-electric effect. An ultra-sensitive needle measures the voltage that is generated while the nanospheres are illuminated.