Researchers in the Nanoscale Solar Cells group at AMOLF have recently published two papers, one in Nature Communications and one in Nanoscale, demonstrating new imaging techniques for investigating the nanoscale properties of materials.

Measuring 3D structure
In a collaboration with the FEI company, the researchers developed a technique that makes it possible to quickly and easily image the 3D structure of devices with only a scanning electron microscope. 3D validation of devices plays a critical role in determining the properties of various materials, such as uniform coatings on nanoparticles, voids in films, and the proper layering of complex structures. Traditional processes, however, have strict requirements on the samples. For instance, the samples have to be either extremely thin (a thousand times thinner than a sheet of paper, in order to be transparent to the electrons for the imaging), or to be cut into a series of slices with a beam of focused ions, and thus necessarily destroyed. The new imaging technique alleviates both these constraints. The sample is first imaged at various electron beam energies, which changes how deeply the electrons probe into the sample. Then, an algorithm is applied to disentangle the mixing of signals between the obtained images. This results in a full 3D reconstruction of the material. The reconstruction can be further inspected through cross sections or layered slices without actually damaging the sample, and can be performed even for devices on thick substrates. 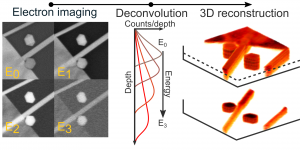 Interacting with light
Researchers in the nanophotonics and systems biophysics departments together have utilized a new type of super-resolution fluorescence imaging technique to measure the interactions between light and silicon nanowires. Nanowires are extremely small (thousands of times thinner than a hair) and interact strongly with light, oftentimes in surprising ways compared to more classical length scales. For example, nanowires can collect light from areas much larger than their cross section, effectively “funneling” light into themselves. They can also redirect and enhance light emission. The combined efforts of the AMOLF researchers has led to the adaptation of a biological imaging technique that uses precise measurements of random activation of fluorescent dye molecules to map the interactions between light and the nanowires at high resolution. The technique allows for measurements of interesting and useful optical phenomena, such as, redirecting, guiding, and enhancing the emission of light, and also establishes a platform for future investigations of light-matter interactions.

Figure: The nanowires are imaged in a solution containing fluorescent molecules, allowing a map of the interaction strengths to be made. From this map, computational modeling allows the separation of the observed behavior into individual phenomena, such as light redirection, guiding, and enhancement.