Researchers from the Nanoscale Solar Cells group at AMOLF together with collaborators from the University of Texas, Austin, and Columbia University, New York, found that nanostructures can enable efficiencies above the so-called “Shockley-Queisser” limit, which limits the efficiency of a normal solar cell to 34%. These results were published in ACS Nano on September 1, 2016.

Nanophotonic structures can act as optical antennas, capturing light from an area much larger than their physical size. Recently, there has been speculation that such an apparent inherent light concentration effect could increase the efficiency of solar cells in the same way that macroscopic solar cells perform better when combined with concentrating lenses or mirrors.

The researchers have now shown that the antenna effect by itself does not lead to higher efficiency. Instead, there must be a change in the angular distribution of emitted light (directivity) to improve solar cell efficiency. The more narrow the angular distribution of emission, the higher the efficiency can be. The team presents theoretical limits to the directivity achievable in nanostructures and they analyze several practical designs.

Interestingly, unlike in planar solar cells, nanostructured solar cells provide the possibility to have both directional emission and high light outcoupling efficiency. This is critical, because in planar solar cells made of materials used today the gains in efficiency due to directivity almost exactly cancels out with losses due to a reduced light outcoupling efficiency. Thus, nanostructuring can in principle enhance the efficiency not only in perfect materials, but also in those currently in use. 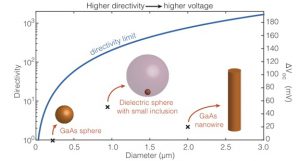 Figure: Theoretical limit of the directivity (and corresponding solar cell voltage enhancement) as a function of nanostructure size. Crosses indicate the locations of three designs with differing degrees of directivity.