Researchers at the FOM Institute AMOLF have observed a surprising effect during experiments in which light is ‘trapped’ in a cavity. They established that the presence of nanoparticles close to the cavity could increase the speed of the light running through the cavity. This goes against the 70-year-old expectation that the refractive index of the particles predicts the speed of light. In that case, the nanoparticles ought to slow the light down. Radiation from the particles was found to be responsible for this surprising effect. Furthermore, the particles cause the light to remain trapped in the cavity for a longer period of time. This is an important finding, as the measurement of such changes in the speed of light forms the basis for sensors with extreme sensitivity. The researchers published their findings in Physical Review Letters on 11 November.

Refractive index
For the experiment, the researchers used a doughnut-shaped glass cavity in which the light can circulate for a long time. They placed gold nanoparticles close to the doughnut. To their surprise, the researchers noticed the light moved faster under the influence of the nanoparticles and remained trapped in the cavity for a longer period than expected. Until now, scientists had thought the opposite would happen; the light would be slowed down, because the high refractive index of the nanoparticles would reduce the speed of light in the doughnut.

Radiation
The striking results from the experiment can be ascribed to the radiation emitted by the nanoparticles and the cavity. The escaping light interacts with the radiation emitted by the nanoparticles, as a result of which the speed of light in the cavity increases. AMOLF PhD student Freek Ruesink: ‘It was always thought that the effect of radiation would be negligible, especially in the case of a perfectly-shaped cavity such as the one we use. Only the refractive index was thought to influence the speed of light. However, we now see that this assumption does not hold. Our experiments demonstrate this radiation effect can even overshadow the influence of the refractive index.’

Sensors and other systems
The experimental demonstration of this influence of radiation on the speed of light is important for the development of sensors. Many modern sensors are based on accurate measurements of the speed of light. In addition, the results could form the basis for research into many different systems in which radiation or other forms of energy loss play a role. Project leader Ewold Verhagen: ‘It is tempting to neglect the fact that physical systems lose energy due to friction, resistance or radiation. This makes the description of phenomena, such as sound vibrations or electrical currents, simpler. The unexpected relevance of energy loss shows that it could be useful to reassess other systems as well.’ 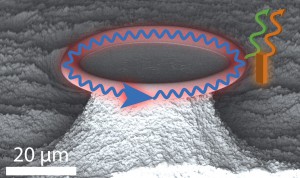 A glass micro-doughnut on a silicon pedestal. Light waves (blue arrow) can circulate in the cavity up to one million times before they escape (green arrow). When the escaping light from the glass cavity interferes with the light wave of a nanoparticle (orange), the light in the cavity moves faster instead of slower.

The research described above was selected by the editors of Physical Review Letters as an editorial highlight.