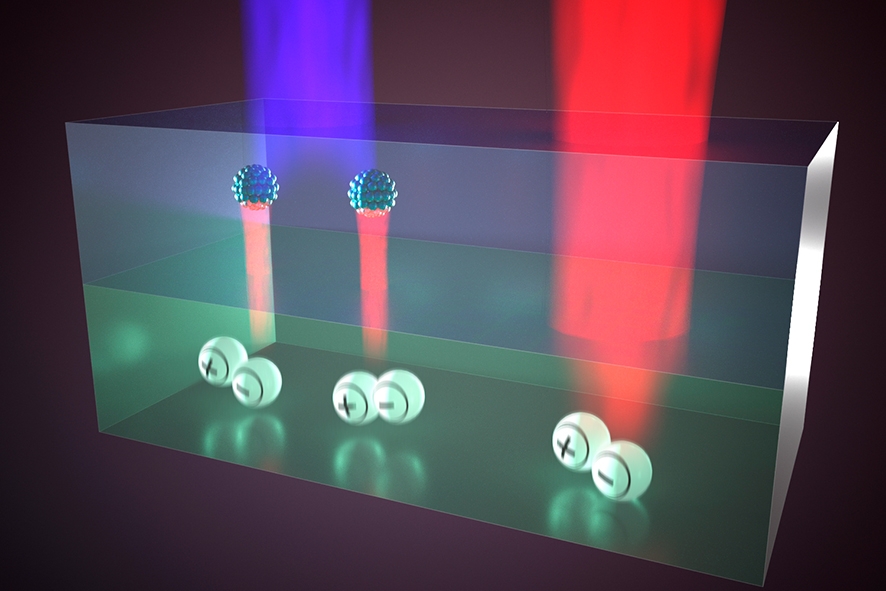 Over the last twenty years, the efficiency of high quality silicon solar cells increased only two percent and it will be very hard to make further improvements in the coming years. The main reason is that conventional solar cells waste a large part of the incoming sunlight. With silicon technology it is simply impossible to convert all sunlight into electrical energy because silicon only absorbs part of the solar spectrum. Also, high-energy photons from the blue part of the spectrum are not converted efficiently and they generate unwanted heat in the solar cell.

At research institute AMOLF, the Hybrid Solar Cells group led by Bruno Ehrler studies the properties of organic semiconductors to overcome the limitations of inorganic (silicon) solar cells. “There are two promising strategies that would improve solar cells tremendously”, says PhD student Moritz Futscher. “The first one, tandem solar cell technology based on a combination of hybrid perovskite materials and silicon, receives a lot of attention and is studied extensively by researchers from all over the world. We study perovskites as well, but we are also one of the few research groups that studies the second technology, which harnesses a process called singlet fission.”

Futscher and his colleagues theoretically compared singlet fission photon multipliers with tandem solar cells that use a combination of perovskites and silicon under real-weather conditions. “We know that tandem solar cells work very well in sunny regions but underperform in regions with fluctuating weather conditions. So, we took the weather and solar spectrum into account”, says Futscher. “We found that the combination of a singlet fission photon multiplier and silicon solar cells works just as well as the combination perovskites with silicon (tandem). However, under fluctuating weather conditions found in the Netherlands, the singlet fission photon multiplier proves the be a more stable choice.”

The fact that singlet fission based solar cells potentially work as well as tandem solar cells – and even better under certain circumstances – makes it a very interesting alternative. “These photon multipliers are easy to make. It is basically a thin plastic foil that can be placed on top of an existing solar cell. The solar cell technology itself does not need to be changed,” says Futscher. “Although the technology works best with the latest state-of-the-art solar cells, such a singlet fission foil would even improve the performance of the silicon solar cells in use, especially under the varying weather conditions we face in the Netherlands.” 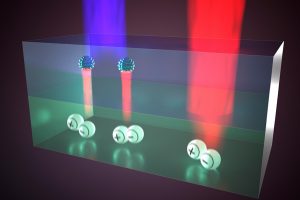 Image caption
The singlet fission photon multiplier converts high energy photons into two low energy photons, which can efficiently be transformed into electric energy by the solar cell. Without singlet fission, the high-energy light  would lose a large part of its energy to heat. Credits image: Henk-Jan Boluijt