Jeroen van Zon will use his grant to start a research program on the role of stochastic processes in embryonic development. In a growing embryo each cell has to assume exactly the right cell fate in order to result in a healthy adult organism. Surprisingly, in many important cases cells assume their fate in a stochastic manner, picking one fate randomly from a repertoire of multiple possible fates. It has been hypothesized that these stochastic cell fate decisions are driven by small stochastic fluctuations on the molecular level, also called ‘molecular noise’, that are amplified by signaling networks inside the cell. Van Zon’s group will use a quantitative biophysics approach to study stochastic cell fate decisions in the small nematode worm Caenorhabiditis elegans. Using this simple multicellular organism, the researchers will analyze how stochastic cell fate decisions arise from molecular noise and how embryos can use such a fundamentally stochastic process to still generate extremely reliable outcomes.

This is the third ERC Starting Grant assigned to AMOLF this year. 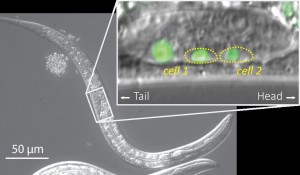 A 15 hour old C. elegans worm. The two cells outlined in yellow are in the process of making a stochastic cell fate decision. Using a fluorescent protein (shown in green) the activity of the signaling network is measured. Ultimately, the signaling activity will be restricted stochastically to one of the two cells. This in turn will lead to a different cell fate for each cell.