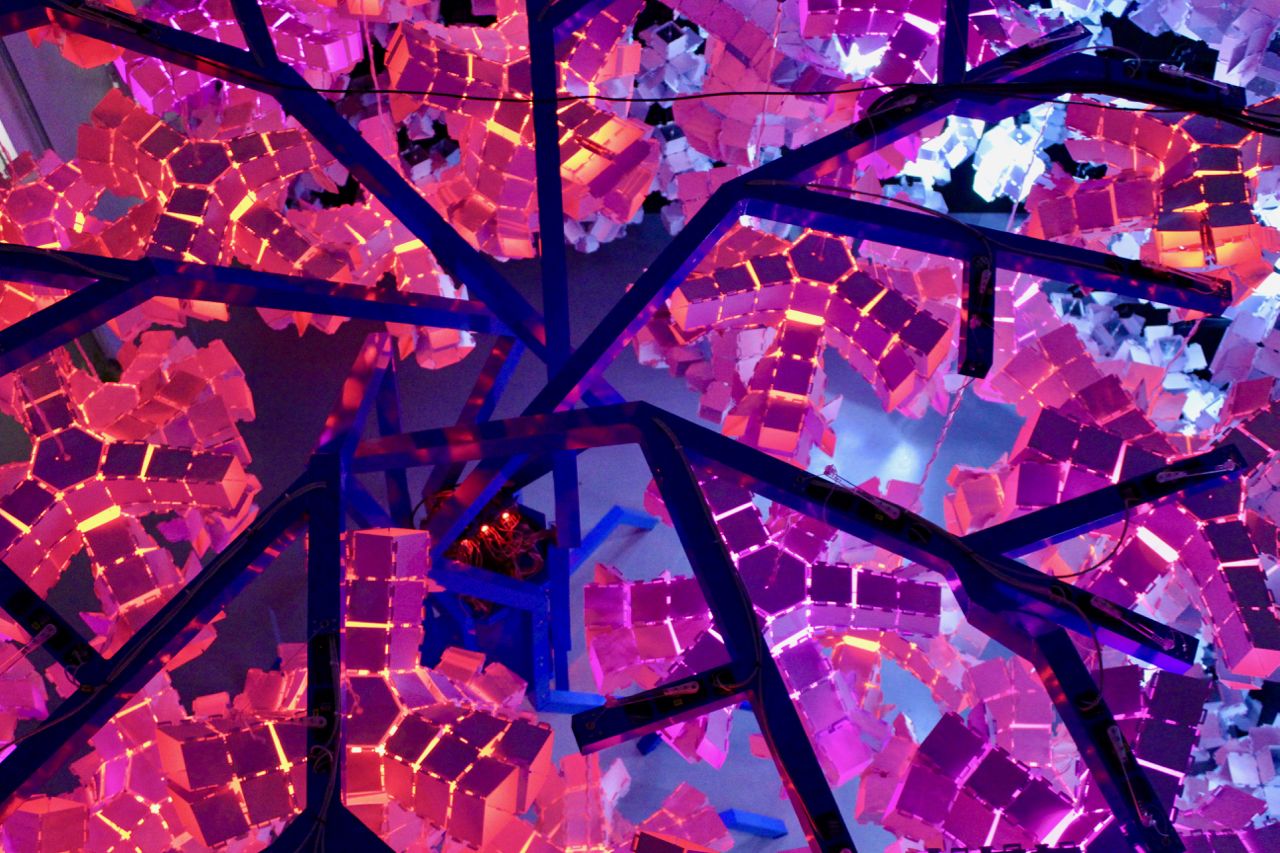 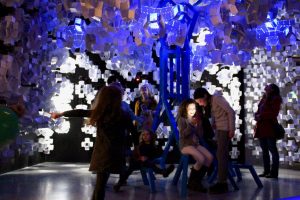 Between order and chaos, a mathematical space originally studied to understand the behaviour of avalanches and crystallisation of liquids, scientists are uncovering the rules for the existence of life itself. A small region called the “Edge of Chaos” displays complex behaviour that is both organised and unstable, creating the continuous flux that scientist hypothesise drives the engine of life – evolution – and produces the boundless novelty of the natural world.

Inspired by the science of complexity, Edge of Chaos is a collaboration between scientist Bas Overvelde (AMOLF and Studio Overvelde) and artists Vasilija Abramovic & Ruairi Glynn (Interactive Architecture Lab, Bartlett UCL, bringing together the scientific work on transformable geometries previously published by Overvelde et al. in Nature and Interactive Architecture Lab’s expertise in immersive spatial design and interaction, the team collaborated on developing their competition winning entry for the international touring exhibition Capitaine Futur which opened in Paris at La Gaîté Lyrique on the 4th April. 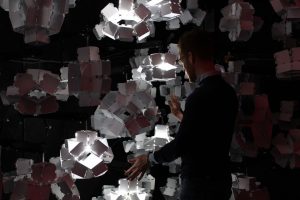 Scientific advances in fabrication technologies are enabling the production of materials that get their properties from their structure, rather than only from their chemistry. They are man-made materials of the future, and exhibit properties that do not yet exist in nature. In the design of some materials it is possible to incorporate internal mechanisms capable of reconfiguring their spatial architecture, and in this way to enable tunable functionality. Inspired by the structural diversity and foldability of the prismatic geometries that can be constructed using origami techniques, Overvelde introduced a design strategy based on space-filling tessellations of polyhedra to create three-dimensional reconfigurable materials. The underlying principles are scale-independent, and can be applied to the design of the next generation of reconfigurable structures and materials, ranging from nanometre-scale systems to metrescale transformable architectures.

In a futuristic world expanding on this design strategy, the interactive installation “Edge of Chaos” invites visitors to experience the balancing point between highly ordered and turbulent systems, composed of three features. At its centre, a robotic tree representing “Life”, surrounded by an inert “Cloud” representing the vast unorganised matter of an entropic universe, and an interactive surface that represents the “Edge of Chaos”. The robotic tree and concept formation behind the installation was developed by the Interactive Architecture Lab designers, harnessing passive and active geometries that incorporate over 25.000 building block units designed and developed by Studio Overvelde. The interactive surface and its emergent behaviours were developed between the labs at AMOLF, Amsterdam, and Bartlett UCL, London celebrating creative possibilities of collaborating across science, art and design.

The narrative installation makes tangible the science of materials and complexity to children and adults alike, demonstrating its behaviour through sound, light and robotic motion, encouraging playful exploration of worlds to come. Just like Mort Weisinger’s space-traveling scientist and adventurer traveler: Capitaine Futur.