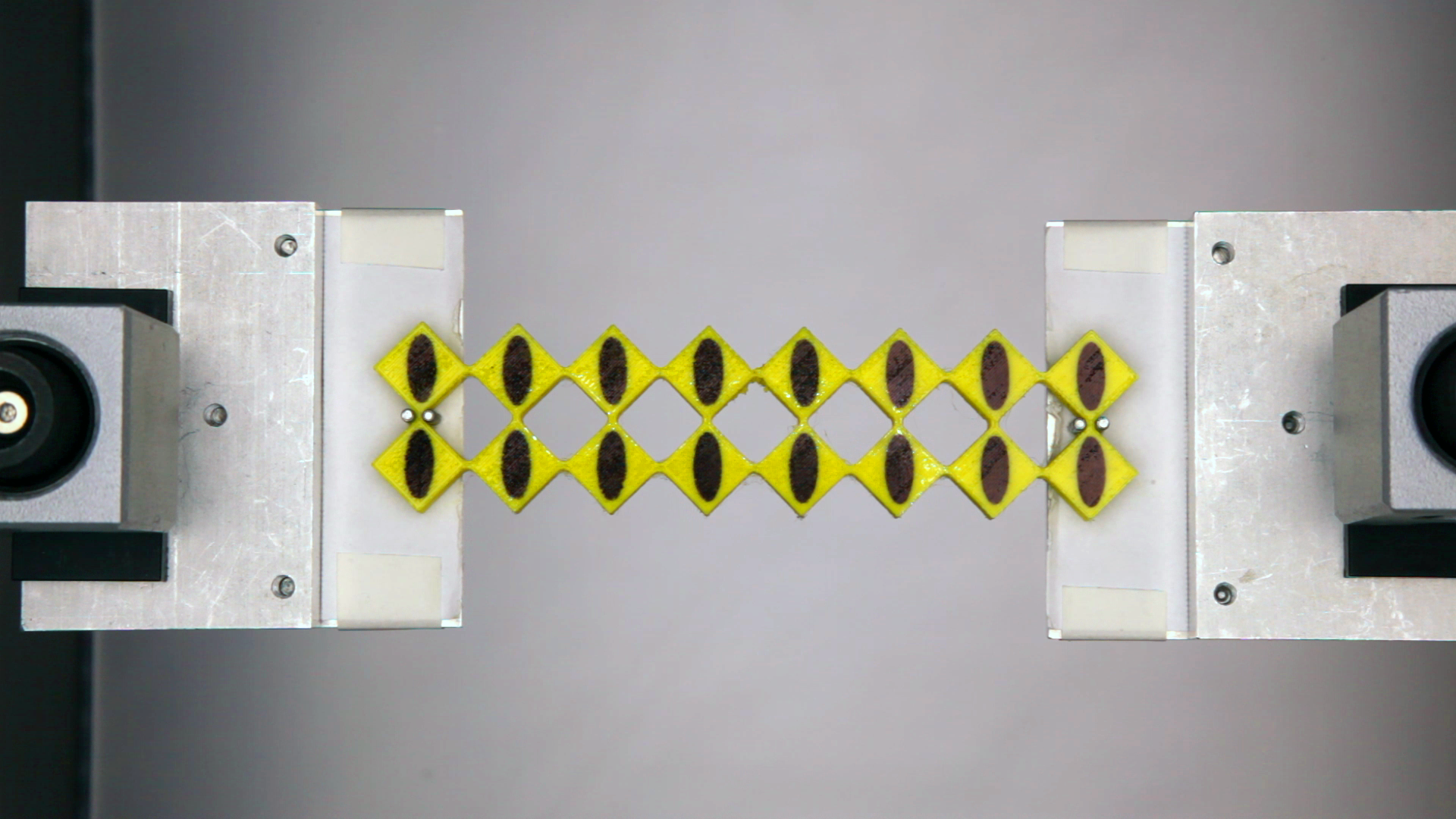 ‘Bigger is different’ – the unusual physics of mechanical metamaterials exposed

Mechanical metamaterials, which exhibit unusual properties such as shape morphing and programmability, have been found to display further surprising features. When the materials are a step in size larger, new rules seem to apply. This was discovered by AMOLF researchers and collaborators from Leiden University and the University of Amsterdam. Their findings are published in Nature Physics on 25 September.

“In standard materials such as a rubber band, we understand what happens when you add more material”, says first author Corentin Coulais. “If you make the rubber band twice as long, then it is twice as easy to stretch. That is basic mechanics. But mechanical metamaterials are different. The exact opposite can happen. For example, we discovered that a long metamaterial can actually be stiffer than a short one.”

Until now, the research into metamaterials was focused on relatively small systems, in which aspects such as programmability are easily investigated. “However, we suspected that different effects would occur in larger systems”, says Coulais. “We have now studied that extensively.”

As a postdoc in the group for Mechanical Metamaterials of Martin van Hecke, Coulais examined a relatively simple strip of metamaterial together with Leiden University master’s student Chris Kettenis. This unidimensional metamaterial, built up from stiff elements that can rotate slightly with respect to each other, unexpectedly became stiffer when its length was doubled. The striking scale effect also occurred in the case of the more complex two- and three-dimensional metamaterials.

The team also discovered that there was also a characteristic length scale that marked the transition from small to large. Coulais: “We see that above this scale, the special functionality of the metamaterials wears out, so to speak. The special effects of the geometric structure become spread out.”


Caption for the film of the strip: The length scale effect can best be demonstrated by taking a simple unidimensional strip of metamaterial. When a load is applied, the internal geometry of the metamaterial causes the square units to rotate in opposite directions with respect to each other. At a greater distance from the load-bearing point, a clear decrease in the degree of rotation can be observed. This ‘attenuation’ also occurs in more complex two- and three-dimensional versions of the metamaterial.

Coulais emphasizes that only the design of the metamaterial is responsible for the characteristic length scale. Take, for example, the influence of the flexibility of the pivot points between squares. The intrinsic properties of the rubber that the metamaterial is made from are not relevant. “This really is a new physics phenomenon that we have now been able to reproduce in computer simulations as well.”

It is clear that designers of metamaterials should take the characteristic length scale into account. However, this does not limit the possibilities says Coulais. “On the contrary, the new physics that we now describe in Nature Physics actually introduces a whole new range of possibilities.”

Another consequence of the scale effects also came to light. When the material is larger, a small offset in the position of the pressure point will give rise to a completely different response of the material. This opens possibilities to design materials that incorporate different types of behavior. An example is a material that can be both flexible and stiff depending on how it is constricted.

Coulais is now employed at the Institute of Physics of the University of Amsterdam (UvA), where he is continuing his pioneering work with his own research group. “There is still a lot to discover about these unusual materials.”