Scientists from FOM institute AMOLF have observed monster waves of light. Monster waves are waves that seem to emerge out of nowhere and then rapidly disappear again. The researchers have shown that it is possible to influence the probability of such a light wave occurring. That makes it possible to utilise the immense light intensity of a monster wave, for example for faster telecommunication or more sensitive sensors. The research, a collaboration with researchers from the United Kingdom and Saudi Arabia, was published in Nature Physics on 9 March.

For centuries, seafarers’ stories about monster waves, gigantic waves that suddenly appeared upon a calm sea and then disappeared again were dismissed as fishermen’s tales. The truth about these stories was only obtained in 1995 with measurements of waves around drilling platforms in the North Sea. The measurements demonstrated that every so often the drilling platform was hit by a wave that was far higher than expected. These monster waves are also known as rogue waves, freak waves or killer waves.

Cacophony of light
Do light waves exhibit this behaviour as well? And can you influence that behaviour? To test this the researchers from AMOLF designed optical chips with small optical cavities in which they trapped light. The researchers opted for so-called chaotic optical cavities. These are not perfectly round as result of which the light collides with the walls in an unstructured manner. Light in the chaotic optical cavity is sensitive for small changes in the angle of incidence or the colour of the light. Consequently light waves are propagated in all directions, are reflected by the walls and create apparently random interference patterns. In short, the chaotic optical cavity contains a cacophony of light.

To investigate monster waves of light, the physicists transmitted very short light flashes via a single channel into the optical cavity. On the other side they placed two or more escape channels, through which the light could leave the cavity. The researchers observed the behaviour of the light both experimentally and in computer observations. They saw that occasionally at random positions large peaks in light intensity arose: the monster waves.

Minuscule monsters
The light peaks were very brief: less than 200 femtoseconds (a femtosecond is a quadrillionth of a second). Furthermore the peaks were highly localised, in an area with a diameter of about 200 nanometres (200 billionths of a metre).

Group leader Kobus Kuipers: “It was fascinating to observe, with our microscope, this sea of quietly sloshing light waves in which a monster wave suddenly arose from nowhere and then just as quickly disappeared, as if nothing had happened.”

Taming monster waves
The researchers also managed to control the monster waves. For example, by widening the escape channels more waves could escape through as long as they managed to enter the channel at the right angle. As these ‘light rays’ could escape the cacophony of the remaining light decreased. Consequently the probability of the light waves reinforcing each other and therefore a monster wave occurring increased.

This ability to tame monster waves also makes it possible to utilise the immense intensity of the wave. That opens up applications in optical chips for faster telecommunication, more efficient solar cells and more sensitive sensors.

Broadcast BNR radio, March 12
A short interview with Kobus Kuipers about monster waves on BNR radio will be broadcast in Dutch, March 12, around 17:20 hrs. 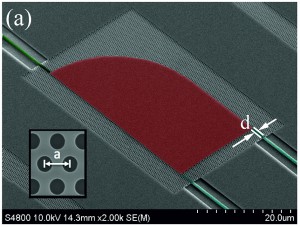 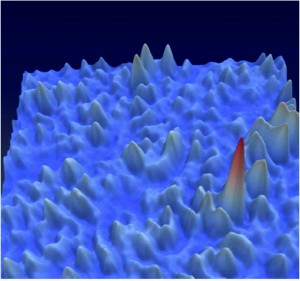 Monster wave – Three-dimensional representation of an experimental observation of a monster wave (red). In the measurement area, of 5 by 5 micrometres, it can be clearly seen how the light waves slosh back and forth in an apparently random pattern.