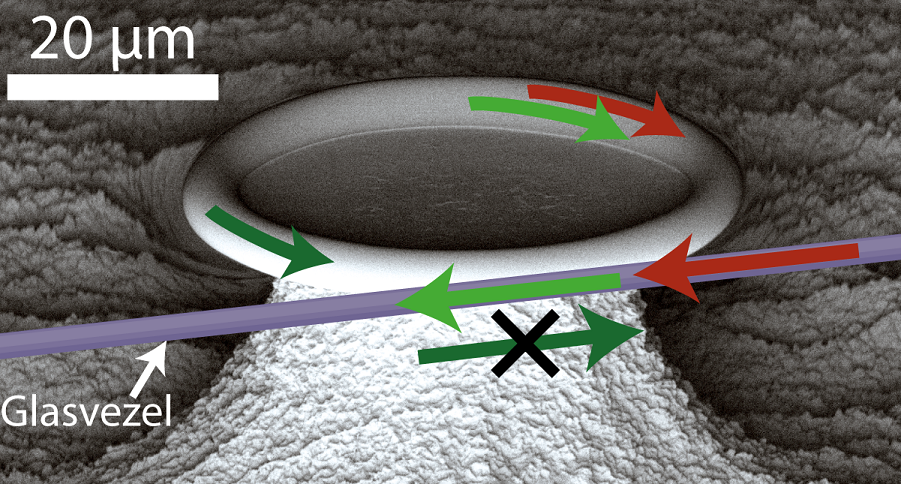 Researchers at FOM institute AMOLF and the University of Texas at Austin have created a compact one-way street for light. That is remarkable because light waves can generally move in both directions inside a material. Optical chips could benefit from the new functionality, as it enables a new way to route data encoded in the light signals. The researchers published their results in Nature Communications on 29 November.

How does it work?
Although the effect is not usually noticeable, light that hits an object exerts a small force slightly ‘pushing’ the object it illuminates. In some cases, light can even cause a small object to move. The researchers used this fact to produce a one-way street for light. They achieved this by temporarily trapping light that passes through an optical fibre in a perfectly formed ring with a diameter smaller than that of a human hair. In such a ring, light can easily circulate 100,000 times, which considerably strengthens the force it exerts on the walls. As a result, the ring expands slightly. The researchers subsequently introduced a second light wave with a slightly different colour than the first. Due to the interference of both light waves, the ring vibrates, but only if the two waves move through the ring in the same direction. As the system has been designed in such a way that the optical fibre only allows light to pass through if the ring vibrates, light from the opposite direction is blocked.

Application
The demonstrated principles could be very important for ensuring that light moves in the right direction in optical chips. Present-day data is already largely transported in the form of light. The processing of information in optical circuits on chips has major advantages compared to electronic alternatives, especially as light uses far less energy. However, a missing component on these optical chips to date has been an optical isolator: a component that allows waves to pass through in one direction, but blocks waves in the other direction, thereby controlling the transport of signals. The experiment demonstrates a prototype of a highly compact isolator, which can also be actively switched on and off using light.

Theory and follow-up research
The researchers translated the laboratory observations into a general theory of ‘optomechanical isolation’. This theory describes and predicts that implementation of one-way traffic will be possible in a wide range of different systems. This includes systems that allow even faster processing of optical signals. Furthermore, the researchers demonstrate that the isolator could also work for radio waves, which could make its application in future quantum computers possible. 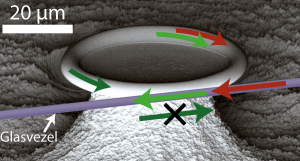 Figure: With the help of an optical fibre (purple), the researchers were able to trap light in a ring. When two different colours (red and light green) start to circulate in the same direction in  the ring, then the ring starts to vibrate. As a result of this, light is allowed to pass through. As the dark green light moving in the opposite direction does not cause the ring to vibrate,
light in that direction is blocked.