A computer made of rubber

A piece of corrugated rubber can function as a simple computer, displaying memory and dis-playing the ability to count to two. Physicists from Leiden University and AMOLF published about the computing rubber in the journal PNAS. ‘Simple materials can process information, and we want to find the principles behind that.’

Video and text by Bruno Wayenburg

Where other physicists use telescopes, microscopes or particle accelerators to study their subjects, Martin van Hecke and Hadrien Bense just use pieces of rubber, which they fold and film. This way, they have proven that even an extremely simple material is able to perform some sort of information processing.

A video by the researchers (both at Leiden University and research institute AMOLF in Amsterdam) shows a piece of corrugated rubber, slowly squashed from above using a press. First, the corrugations slowly bend along, but at a certain point, they snap, which means that they suddenly pop into another shape. Bense and Van Hecke decided to view these snapping points as ‘bits’, which shift from 0 to 1 as they buckle, and back to 0 when they unsnap

Using cameras and a lot of Bense’s patience, they charted all the states. Things get complicated fast: one piece of rubber showing three bits can theoretically exist in eight states. Each bit flip means a transition to another state.

The field that the group is pioneering is called ‘mechanical metamaterials’, materials whose properties are dependent on the mechanical structure, instead of only on the properties of the material itself.

Initially, the corrugated rubber transitioned through four states: from no bits switched on (000) to all three bits switched on (111), and then back when the pressure is released. But things became more interesting when Bense tilted the ground plate a bit. This way, some distortion is introduced, which causes the bits to influence each other.

The scheme now becomes much more complicated, allowing up to seven different states to be reached. Crucially, sometimes increasing and decreasing the pressure results in a state that the system hasn’t been in before. ‘This is sort of a memory’, says Bense, ‘the state of the system depends not only on the pressure, but also on its past.’ 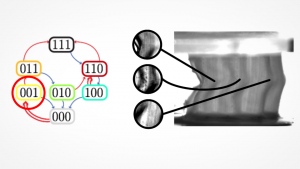 Another piece of rubber shows counting behavior. One state is reached after one squeeze-and-release, another state, after a second squeeze-and-release. ‘So in effect, it counts the number of squeezes’, says Bense. ‘That is a form of information processing, even if it’s a very simple one’, says Van Hecke.

In the article, the researchers describe experiments and calculations, and theorize about the mutual influence of bits, in order to understand the sequences of bit flips. Applications will probably follow,’ says Van Hecke, ‘but I don’t know which ones.’ Earlier research into mechanical metamaterials led to shock absorbing sneakers, and improvements in soft robotics. ‘Applications always come’, says Van Hecke, ‘But we’re first figuring out the principles behind these metamaterials.’