Jaap Kistemaker is the founder of AMOLF and a pioneer in the field of uranium isotope separation. He led AMOLF from 1949 until his retirement in 1982.

In the 50’s he developed a method for separating uranium isotopes with mass spectrometry. After that he developed the principle of uranium enrichment with ultracentrifuges together with fellow-researcher Joop Los. Nowadays this technology is used to produce uranium for use in nuclear fuel reactors, amongst others by Urenco in Almelo, that was founded partly on the basis of this research. 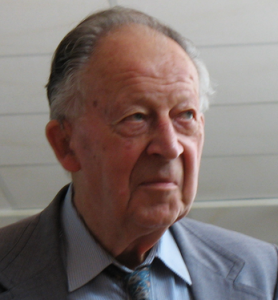 In the 60’s and 70’s Kistemaker led a successful research program in the field of atomic and molecular physics at AMOLF. In that program applications of fundamental research in industry and society always played an important role.
With his research, Kistemaker has played a key role in the development of physics in the Netherlands after the Second World War. After the war, he was sent to physicist Niels Bohr in Denmark to study uranium technology. After his return to Holland, he was asked by the then established Foundation for Fundamental research on Matter (FOM) to found and lead the FOM laboratory for Mass Spectrography. This was on September 15, 1949 at the Hoogte Kadijk, and later the Kruislaan in Amsterdam.
Under Kistemaker’s leadership the institute gained a strong international reputation. In 1982 he retired, but he kept his work room in the institute, and until 2009 could be found in the lab on a weekly basis.
Kistemaker was a professor at the University Leiden, a member of The Royal Netherlands Academy of Arts and Sciences (KNAW), Associate of the Royal Academy of Belgium and honorary doctor of the Universities of Lisbon, Luik and Lublin