No clear winner when it comes to antifreeze protein efficiency

Ever since biologist Arthur DeVries discovered antifreeze proteins in Antarctic fish in the 1960’s, researchers have tried to unravel the mystery behind these remarkable proteins. Thanks to the proteins in their body fluids these fish, and other extremophiles, do not freeze in the cold environment in which they live. The antifreeze proteins, of which there are several varieties, attach to small ice crystals, thereby hindering their growth. So while ice may form in the blood, the crystals are so small that the blood is not deprived of its functions.

Despite the many steps taken in the last decades to understand the workings of the antifreeze proteins, some important questions were still left unanswered. Thanks to an international collaboration between experts in the Netherlands (TU/e and FOM institute AMOLF), the United States (University of Illinois) and Canada (Queen’s University) researchers have now put together important pieces of the puzzle. They published their findings in PNAS on March 2nd, 2016.

Two methods
Roughly speaking, antifreeze proteins function in two ways. On the one hand, they reduce the temperature at which ice crystals begin to grow rapidly, which is called thermal hysteresis (TH). On the other hand, they use ice recrystallization inhibition (IRI), a process in which they hinder small ice crystals from clustering into larger chunks. However, the relationship between these two activities of antifreeze proteins has long been unclear.

This week, the international team of researchers revealed that there actually is no clear relationship between the two activities and that there are also significant differences per protein. This also means that it is not so easy, as had long been thought, to determine how ‘active’ a protein is. Sometimes the TH activity is the most important factor, but more often it is the IRI activity that appears to be the determining factor. This conflicts with the prevailing view that one protein activity is clearly dominant. It also means that chemists might have been looking at the wrong candidates to produce artificial imitations.

Spectroscopy
In the past years Konrad Meister (postdoc in the group of AMOLF director Huib Bakker) has been successful using ultrafast spectroscopy techniques to study how the antifreeze proteins hinder the growth of ice crystals. He went on several expeditions to Antarctica to catch the fish together with members of the research team led by Arthur DeVries (University of Illinois).

In 2015 Konrad Meister received a Marie Sklodowska-Curie Actions grant (165.000 euro) for his research on antifreeze proteins. 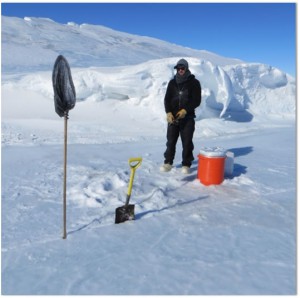