Back to Group highlights page

Materials with short minority carrier diffusion lengths are posing a grand challenge for various solar cell designs. Researchers at the FOM Institute AMOLF have now been able to overcome this challenge by building the first metal-semiconductor core-shell nanowire solar cell. In this proof of concept study the researchers were able to extend the charge carrier collection length along the whole nanowire length by using Au-Cu2O core-shell nanowires first demonstrated by the group in an earlier publication.

Efficient solar cells require optical designs that reduce reflection and that enhance light absorption, by increasing the path of the light inside the semiconductor or by other means. Semiconductor nanowires for example have been shown to exhibit large absorption because they can act as efficient antennas for light. Once the photons are absorbed, electron-hole pairs are generated and need to be extracted efficiently. Metal-semiconductor core-shell nanowires combine the benefits of local contacting (~10 nm from the semiconductor shell to the metal core) with superior absorption via highly tunable optical resonances.

In this study a Cu2O shell in direct contact with the metal core is used, without any additional surface passivation, to prove the concept of lateral charge carrier extraction for materials with short minority carrier diffusion lengths. Utilizing a laser beam induced photocurrent setup, the extension of lateral charge carrier collection along the length of the nanowire was mapped out with high spatial resolution.

This study suggests, that the metal-core semiconductor core-shell geometry can be extended to other semiconductor materials, even with low minority carrier diffusion lengths. If appropriate surface passivation is provided, e.g. by inserting a passivation/tunneling layer between the shell and the metal core, the concept can even lead to high-efficiency solar cells, due to the outstanding electrical and optical properties. 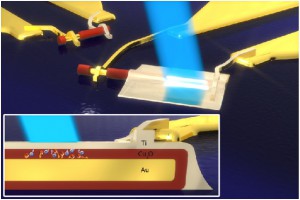