Researchers from FOM Institute AMOLF have discovered that infrared light strongly stimulates the transport of protons (H+ ions) in hydrogen fuel cells. Hydrogen fuel cells are an alternative, clean source of energy: hydrogen and oxygen are directly converted into electricity with clean water as the sole waste product. A good proton conduction increases the efficiency and yield of these cells. The researchers published their results online on June 26, 2014 in Physical Review Letters.

In a hydrogen fuel cell, hydrogen (H2) is dissociated into protons (H+ ions) and electrons. The protons are conducted through a membrane to the other side of the cell where they react with the electrons (that are conducted through an external circuit) and oxygen (O2) to produce water (H2O). For the proper functioning of hydrogen fuel cells it is crucial that the membrane only allows protons to pass through it and no electrons or gas; that is because the electrons must deliver energy outside the cell. A membrane is made up of organic molecules, often sulfonated Teflon, which form miniscule channels with a diameter of about one nanometre through which the protons are conducted. The nanochannels must, however, contain water molecules (H2O), as without water the membrane cannot conduct any protons.

Infrared-induced proton conduction
The researchers from AMOLF have investigated the mechanism of proton conduction through the nanochannels of a known membrane NafionTM. In the nanochannels the protons (H+) combine with the water molecules (H2O) and form hydronium (H3O+) ions. With ultrashort mid-infrared pulses the researchers caused the O-H stretch vibration, the vibration at which the distance between the oxygen and hydrogen atom varies, of the H3O+ ions to oscillate. The researchers discovered that the water molecules around the H3O+ ion subsequently reorganised themselves. As a consequence of this reorganisation one of the hydrogen atoms (H) of the H3O+ ion moved in the direction of the nearest water molecule (H2O). Before this shift the proton charge was distributed equally over the three hydrogen atoms of the H3O+ structure, but during the shift this charge came to lie completely on the shifted hydrogen atom. This gave rise to a H2O H+ OH2 structure. When the vibration subsequently loses its energy through conversion into heat, the proton H+ will once again bind to a single H2O molecule. This molecule can be the original H2O molecule but also a new one. In the latter case a new H3O+ ion has formed, which means that the charge of the proton has been transferred. This entire process of shifting and binding occurs within a very short timescale of 5×10-13 (= 0.0000000000005) seconds.

Comparison with bulk water
The mechanism of infrared-induced proton conduction described above cannot occur in bulk water, i.e. water molecules that are surrounded by many other water molecules. Although it is possible to initiate vibrations in an H3O+ structure in bulk water, these vibrations lose their energy very quickly, within 1×10-13 seconds. Consequently, there is not enough time to observe the reorganization of the water molecules around the H3O+ structure and to transfer one of the hydrogen atoms. In the nanochannels the vibrations take five times as long to lose their energy and so there is enough time to observe the reorganization of the surrounding water molecules and transfer the proton charge.

Implications of the research
The research has shown that infrared light is very effective in initiating proton conduction in the nanochannels of a Nafion membrane. This infrared light is always present because it is part of the heat radiation that always surrounds us. Heat radiation is therefore likely to play an important role in the proton conduction in the nanochannels of a hydrogen fuel cell. A better understanding of how this process works will make it possible to design membranes with a better proton conduction. That will enable the efficiency and yield of hydrogen fuel cells to be improved. 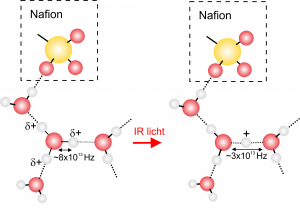 Infrared light causes a vibration in an H3O+ ion. Subsequently the water molecules (H2O) around the H3O+ ion reorganise themselves, and as a result the frequency of the vibration becomes lower and one of the hydrogen atoms (H) shifts towards a nearby water molecule. As a result of this the proton charge, which was originally distributed over the three hydrogen atoms of the H3O+ ion, is transferred to the hydrogen atom that is located between water molecules. This process occurs in 5×10-13 (= 0.0000000000005) seconds. In a subsequent step the H+ can be shifted further and form a new H3O+ ion: the proton charge has been transferred.