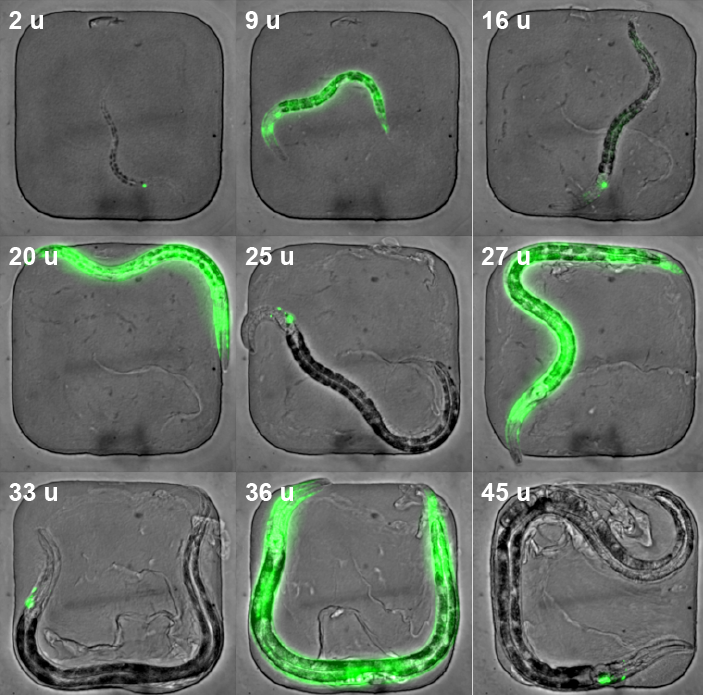 Premiere: watch the development of a larva into an adult worm live

Researchers from FOM institute AMOLF have developed a microscopy technique for the live tracking of development in the individual cells of a growing, eating and moving organism, the nematode worm Caenorhabditis elegans. The next step is to find out how environmental factors affect development. The researchers will publish their findings in Nature Communications, on August 25, 2016.

In humans and animals, the period immediately following birth is all about growth and development. Until now, however, little was known about the details of this process at the cellular level. The new technique now makes this process accessible, by making it possible to track the entire process of development from the larva to the adult animal, at the level of individual cells.

How do you film the entire process of development, from larva to adult nematode?
An important element of the new microscopy technique is the use of time-lapse photography to speed up effects that take place very slowly. Group leader Jeroen van Zon explains: “When using time-lapse photography to study post-embryonic development, the mobility of organisms poses a real challenge. This makes it difficult for us to keep them in the right spot under the microscope at this stage of development.”  The nematode worm C. elegans proved to be the right organism for this purpose. This animal is very small and completes its development from larva to adult nematode in just two days. Dr van Zon and his team placed C. elegans larvae in microchambers, no wider than the diameter of a human hair, which kept them within the microscope’s field of view while they completed their development into adult nematodes. Using a microscope camera with a very fast shutter speed (1-10 milliseconds), the researchers were able to capture sharp images, even when the larvae were moving quickly. The result is a time-lapse film of a newborn larva – just one hundred micrometers long – developing into a one-millimeter-long adult nematode.

Better understanding of developmental biological clocks
This new microscopy technique can be used to expand our knowledge of post-embryonic development in complex organisms, including humans. There is, for instance, the still unanswered question of how the body knows when to initiate major changes, such as the shedding of milk teeth. We still know very little about the biological clock that determines the timing of these processes. Development in C. elegans, as in humans, unfolds in accordance with a certain rhythm. The researchers observed how the larvae produced certain proteins – made fluorescent for the purposes of the experiment – every ten hours. The production of this protein is controlled by a biological clock. It is the first time that this process has been captured on film.

The role of the environment in development
Having developed the technology to track development at the level of individual cells, in a growing and moving organism, it is time to take the next step. Jeroen van Zon wants to use the time-lapse microscopy technique to find out how environmental factors, such as diet, influence C. elegans’ developmental clock. “As in humans, this interaction is governed by signaling proteins, such as insulin,” says Dr van Zon. “We want to explore this further, and this new technique has enormous potential in this regard!”.

Caption: (a) A C. elegans nematode worm growing in a microchamber. The nematode glows green whenever the MLT-10 protein is synthesized. This protein is part of the biological clock that determines the rhythm of the nematode’s development. The time displayed indicates the number of hours that have passed since the larva emerged from the egg.

(b) Measurements of MLT-10 production as a function of time, in 15 individual nematodes. The black curve was derived from the nematode in the first image (a). The rhythm of development varies from one nematode to another, which means that some individuals reach adulthood sooner than others. This variation can only be seen if individual nematodes are monitored throughout development.

Video
‘Time-lapse’ film of the biological clock in a C. elegans nematode worm